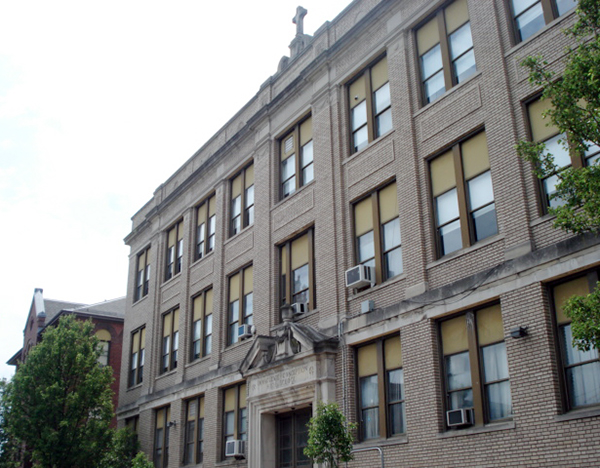 (RNS1-JULY 8) Immaculate Conception High School is a Roman Catholic coeducational college preparatory high school that operates under the supervision of the Roman Catholic Archdiocese of Newark. For use with RNS-IMMACULATE-HIGH-SCHOOL transmitted July 8, 2014. Creative Commons image by Blondhairblueeyed

But 35 years later, Alworth’s high school, Immaculate in Montclair, where she graduated in 1979, is fighting to stay open. The school is $900,000 in debt, enrollment is less than half of the building’s capacity and the Archdiocese of Newark will close its doors if it can’t come up with a plan to boost enrollment and improve its finances, said Jim Goodness, a spokesman for the archdiocese.

“It was a complete surprise when they decided to close the school,” Alworth said. “I’m going to do everything I can to keep this school open because I believe in its mission.”

Catholic schools across the state and country are struggling. Goodness said the state’s largest diocese, the Archdiocese of Newark, closed four of its 70 elementary schools this year.

The four schools closed this year were not financially sound and could not keep their enrollment up, Goodness said. The archdiocese closed six schools in 2012, six in 2010 and three in 2009.

Other Catholic dioceses in New Jersey have faced the same problems. The Camden, Metuchen, Paterson and Trenton dioceses have collectively closed more than 20 schools in five years, according to diocese officials.

In the last decade, almost 1,900 Catholic schools across the country closed and almost 580,000 students moved out of the Catholic school system, said McDonald.

For many students and families, the closures and threat of closures have caused not only anxiety, but also heartbreak.

Brianna White of Newark, who recently worked at a car wash and bake sale to raise money for Immaculate Conception, said all her siblings went to the school. She said the small Catholic school environment helped build her confidence.

Brianna just finished her junior year at Immaculate Conception and doesn’t know what she’ll do if the school closes.
“I feel like as seniors, we shouldn’t have to be looking for another high school,” she said. “We’ve gotten so close together. We are a fun, loving family.”

A 2013 Gallup poll shows that New Jersey has the second highest Catholic population in the country, about 44 percent. But even with such a large number of Catholics, the number of students in Catholic schools in the Newark archdiocese has declined more than 40 percent since 1999, according to the archdiocese.

Catholic elementary schools, according to Dale McDonald, the director of public policy and educational research at the National Catholic Education Association, have taken a bigger hit than secondary schools. High schools, she explained, are more likely to be operated through religious orders or boards of trustees, so their funding is more tuition driven. She said the high schools also have a stronger hold on alumni who are likely to donate money that helps keep the doors open.

But not everyone has lost faith in the future of Catholic education.

Goodness, the spokesman for the Archdiocese of Newark, thinks its new “Lighting the Way” program could be a sustainable model for Catholic elementary schools. The program will change the parish-school relationship to an across-the-archdiocese partnership, essentially pooling resources.

Margaret Dames, the superintendent of schools for the Archdiocese of Newark, said the archdiocese is also planning to adjust its marketing strategy. She said they are beginning to emphasize the fact that all schools have Middle States accreditation and 13 have received Blue Ribbon recognition for high achievement.

“Our Catholic schools are on the cutting edge,” Dames said. “We are just as good if not better than the other options.”

Many parents and students say they still believe in the Catholic school mission.

John Bishop, a 1978 graduate of Immaculate Conception, is on a board to raise money and create a long-term plan to boost enrollment at the school. Since June 10, the school has raised more than $287,000 through its gofundme.com webpage as of yesterday, passing the halfway mark to its $500,000 goal by July 15.

“We’re putting kids into good schools like the University of Chicago and UNC,” Bishop said. “It’s going to take some time, but in the last few years we have had a huge influx of alums. That’s been huge for us.”

(Neil Haggerty writes for The Star-Ledger in Newark, N.J.)

Previous Ask A Mormon: Is caffeine off-limits or not?
Next Father Knows Best: My boyfriend won’t give me a ring