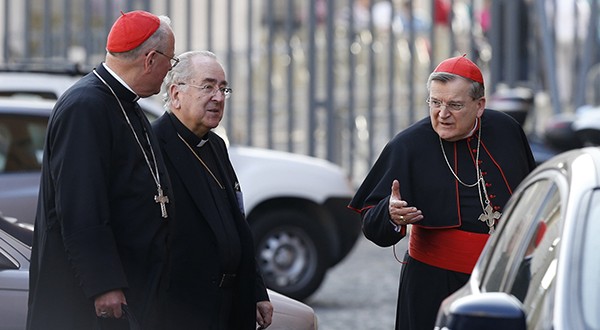 Left to right, Cardinals Timothy M. Dolan of New York, Stanislaw Rylko, president of the Pontifical Council for the Laity, and Raymond L. Burke, prefect of the Supreme Court of the Apostolic Signature, arrive for the morning session of the extraordinary Synod of Bishops on the family at the Vatican on Tuesday (Oct. 14). Photo by Paul Haring, courtesy of Catholic News Service

Share this story!
[todaysdate] VATICAN CITY (RNS) Catholic bishops meeting here narrowly defeated proposals that would have signaled greater acceptance of gays and lesbians and divorced Catholics, a sign of the deep divisions facing the hierarchy as Pope Francis continues his push for a more open church.

While the various proposals received a majority of support from the bishops gathered for the Synod on the Family, they failed on Saturday (Oct. 18) to receive the required two-thirds majority that would have carried the weight of formal approval and churchwide consensus.

Saturday’s vote was an abrupt about-face from last Monday’s mid-term report from the Synod, which spoke of “welcoming homosexual persons” and acknowledging the gifts they have to offer the wider church.

Despite the divide, Francis received a standing ovation that lasted several minutes in his final address to the Synod, where he had called for  “sincere and open” debate.

After days in which divisions inside the Vatican spilled over into the press, the pope described the two-week summit as a “journey together,” and like any human journey, one that featured moments of “desolation, tension and temptations”.

He said the role of the pope was to guarantee the unity of the church, and that he would have been “very worried and saddened if there had not been these temptations and animated discussions.”

Even though the sections on homosexuality and divorce did not pass with formal approval, Francis ordered them into the Synod’s final report so that Catholics could continue to debate the ideas.

Saturday’s vote, however, is not the final word. Francis plans to host a follow-up summit a year from now, and both sides are expected to spend the next 12 months trying to either reinforce existing policy or trying to nudge the bishops toward a more open approach.

Nonetheless, the closeness of the votes reflected a deep divide within the hierarchy that erupted into the open after Monday’s gesture toward gay Catholics.  After a vocal conservative revolt, English-speaking bishops pressed to change the wording from “welcoming” to  “providing for homosexual persons”.

“It’s disappointing that some in the institutional church are not yet ready to welcome all God’s children to the table,” said Jim FitzGerald, the group’s executive director.

Francis DeBernardo, executive director of New Ways Ministry, a Maryland-based gay Catholic group that’s often at odds with the hierarchy, was disappointed that the bishops’ final report overturned the “gracious welcome” issued to gays earlier in the week.

“Instead, the bishops have taken a narrow view of pastoral care by defining it simply as opposition to marriage for same-gender couples,” he said in a statement, adding that the bishops had failed to take account of those gays who receive “unjust and oppressive treatment” from governments, church, families, and society.

At a Vatican media conference earlier Saturday, Cardinal Oswald Gracias of Mumbai, India, insisted there was “no cleavage,” or divide, among the bishops, and that gays and lesbians were welcome in the church.

“Are gays welcome? I would say certainly, they are part of the church,” he said. “There’s no question of condemnation. I would say we are working together.”

“The pope, more than anyone else as the pastor of the universal church, is bound to serve the truth,” Burke told BuzzFeed from Rome. “The pope is not free to change the church’s teachings with regard to the immorality of homosexual acts or the insolubility of marriage or any other doctrine of the faith.”

Burke also acknowledged rumors that Francis is poised to demote the fiery conservative to a ceremonial post far away from the church’s center of power.

“I very much have enjoyed and have been happy to give this service, so it is a disappointment to leave it,” Burke said. “On the other hand, in the church as priests, we always have to be ready to accept whatever assignment we’re given. And so I trust, by accepting this assignment, I trust that God will bless me, and that’s what’s in the end most important.”

Asked by the National Catholic Reporter who had told him of the pending demotion, Burke replied: “Who do you think?”

Previous “God’s Not Dead,” but He doesn’t have much room for atheists or Muslims
Next October Coffee Talk “Addressing Racism and Prejudices”