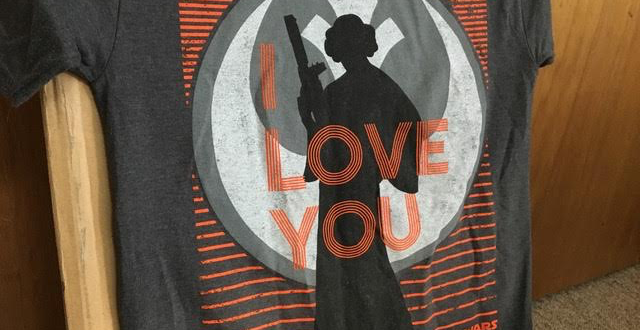 Carrie Fisher Is Dead: There Is No Witty Title For This

I’m writing this in the immediate aftermath of the news.  I am heartbroken and in shock. I’m going to thank the SpokaneFāVS readers for your patience with this piece if it’s somewhat disjointed.

As Jews, when we hear of someone’s death, our first response is supposed to be to say, “Baruch Dayan Ha’emet,” Yet when I read the news of Carrie Fisher’s death, I couldn’t do it. I yelled, “No,” before I realized sounds were coming from my mouth. I continued to yell, “No,” repeatedly before I calmed down enough to fall into the standard recitation.

The Hebrew text translates to, “Blessed is the True Judge.” In American culture, this sounds very wrong. We’re not passing judgment on someone. We’re not saying the person died because G-d judged them. The very brief version of the very long explanation is that we say this to acknowledge that death is beyond our understanding.

There are many discussions to be had about the Jewish response to death and bad news, but I’m not in the frame of mind to have those right now. I can, however, explain that I usually take comfort in having a script for bad news. There is nothing we can do in the face of death. We are completely helpless, but Judaism gives us some small tradition we can hold on to. When we’re distraught or helpless, there is something we can do. It’s small and it may be confusing, but it’s comforting to have something to do.

That being said, I don’t want this piece to focus on the Jewish response to death in general, but this Jew’s response to one specific death.

Carrie Fisher meant the world to me. I’ve ventured in and out of many fandoms over the years, but my love for “Star Wars” has endured. I vividly remember pretending to be Princess Leia on the playground as a small child.  She had such fierceness and such a power, yet she was vulnerable and caring. She was my ideal.  It was such a gift to have such a strong female character from such a young age.

For me personally, everything I wanted to be has been directly influenced by Carrie Fisher. I am a Jew. I am a whopping 5’1” tall.  Both of these are uncommon in acting and were even less common when I was a teen in the 90s. Yet I was originally a Theatre major.  While Carrie Fisher isn’t hallachically Jewish (Hallacha says a child is Jewish only if the mother is Jewish), her father was well-known Jewish singer Eddie Fisher.  We can’t claim her as one of the tribe, but in most of the circles I run in, they usually take pride in her “Jew-ish” ness. So much of the media we consume is very goyish (not Jewish), so we tend to get very excited when we have someone with a Jewish connection (Adam Sandler’s “Chanukah Song,” illustrates this phenomenon perfectly).  Did you know Carrie Fisher was only 5’1” tall? I did. Oh how I did! When I was surrounded by other actresses nearly a foot taller than me, oh how that knowledge comforted me and gave me hope.

When I later changed to major in Media Studies with a minor Gender Studies, I can look back now and see that too was influenced by Carrie Fisher. My love of media analysis and gender studies were both strongly influenced by the character I loved as a child. Star Wars gave me media to consume and explore that was unlike anything else at the time.  Yes I had favorites that conformed to specific gender expectations and roles, but I also had Princess Leia.

This wonderfully powerful princess had wedged herself in my mind when I was very small.  From there she lead me from the playground adventures of my childhood to the in-depth exploration of media and culture in my adulthood.

Carrie Fisher’s legacy is so much more than one role she originated as a teenager.  Even beyond her additional acting roles and prolific writing career, she has helped so many. She has been incredibly open and frank about her addictions and her mental illness. She has written and spoken in interviews about her diagnoses and treatments and she has done so without shame.

In “Wishful Drinking,” she wrote:

“One of the things that baffles me (and there are quite a few) is how there can be so much lingering stigma with regards to mental illness, specifically bipolar disorder. In my opinion, living with manic depression takes a tremendous amount of balls. Not unlike a tour of Afghanistan (though the bombs and bullets, in this case, come from the inside). At times, being bipolar can be an all-consuming challenge, requiring a lot of stamina and even more courage, so if you’re living with this illness and functioning at all, it’s something to be proud of, not ashamed of.

They should issue medals along with the steady stream of medication.”

Although there still exists a stigma about mental illness in our culture, it was through Carrie Fisher’s openness that it is more widely and openly discussed today.  In being willing to discuss the private details of what so many others have hidden away, she has started conversations for so many people and helped to change the culture.

Personally, I can’t find any appropriate closing words. I suggest everyone reads the tributes already beginning to pop up on social media. There were so very many sides to Carrie Fisher and she has done so much to create change—much of which many people were completely unaware. She has made such a difference in the greater world and in my life.

Blessed is the True Judge. And blessed we were for having Carrie Fisher in our lives.

Carrie, we love you.

We only hope you know.

Previous On Chanukah (and Beyond) Representation Matters
Next A ‘good’ Christmas