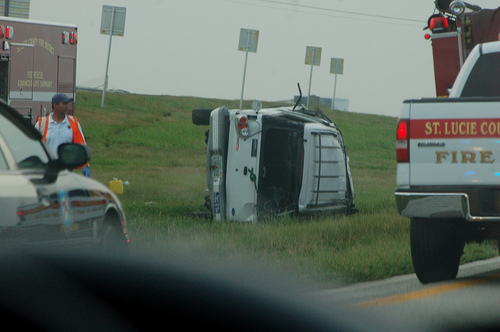 Most roads I drive have some carnage on them. Dead animals dot the roads and highways, and to me this is not worth a double take. Maybe it was the “Road Kill Café” shirt I wore as a child that had a witty pun-laden menu on the back listing dishes that could be made with squirrels and possums and such, or perhaps I’ve simply just seen so much road kill I am un-phased.

However, the rush of a speeding emergency vehicle, the red and blue beams of light, and the whirling sirens that surround a serious car accident bring me to a halt each and every time. I cannot help but look. I do not look at the scene and think, “clearly that accident was the drivers’ fault,” or some other condemning thought, rather I think, “wow, that could have been me.”

Much of life is like this. I have friends who are really in to living healthy and they count every calorie. This is a good thing, but is the underlying ethos behind being so concerned with one’s workout regiment that you can control how long you live? That death is a force you can control?

There is something about a car accident that draws life into sharp focus for me. I am confronted with my own mortality, but also with a larger question about life: is life just a series of meaningless accidents? Is it all just random and senseless collisions on the path to evolutionary excellence?

How does one look at the world’s suffering and one’s own suffering and come away with a conclusion that there’s meaning? Psychiatrists and psychologists talk about family of origin issues. These are issues brought on by one’s life situation that are beyond the control of the individual. Why is there so much violence in one home and peace in another? Why do some people become alcoholics and drug users and abuse their families, while others speak generosity as if it is their first language? Why? Why? Why? The questions and inconsistencies are endless.

Many of the formulas of God are not helpful on this front. To listen to people theologize is to listen to people reduce God, whatever they mean by that, to a set of properties that seems more like a geometric proof than a divine personality. I’ve seen and counseled many people who try to reconcile a one dimensional God with the multi-layered and infinitely complex problems that are birthed in human relationships, and it seems like that God actually makes things worse. God just becomes the standard of projection that people cannot measure up to and must judge themselves by.

Just recently I was in a couple of my friends weddings. Weddings give me even more pause than accidents. Early on I was shaped by the romantic comedies my mom and I used to watch. Those films led me to believe that the “I do” moment of the service is never certain. Someone could choose not to “hold their peace,” or a dramatic speech about the meaning of life or fear of commitment could break out at any moment and the whole thing could go off course.

In that moment beauty and tragedy are on the line, both of them possible and only one of them certain. If the “I do’s” happen it will be a spectacular moment, but if they don’t the whole audience will be forced to witness a car accident.

To be a human being is to live in the moment between the start of the wedding and the I do’s. At a deep level I am aware that something is going on, there is activity and some sense of order, but the conclusion is uncertain and the meaning unclear. I long to see my beloved and read their emotion as they see me, and yet I am consumed by doubt that they will even be in the building when I get there. Life teeters on the brink of beauty and tragedy ceaselessly. I have given everything to life and yet I may be rejected and humiliated.

The appeal of religion is the hope that life does not have to be tragic. It is the hope that meaning is not make-believe. Despite the strong rhetoric and illusion of certainty, religion is at most a hope. A hope that we will see God and we will not be rejected or turned away. It’s a hope that God by saying yes to us will bring meaning to all of the other apparent accidents and tragedies we have seen.