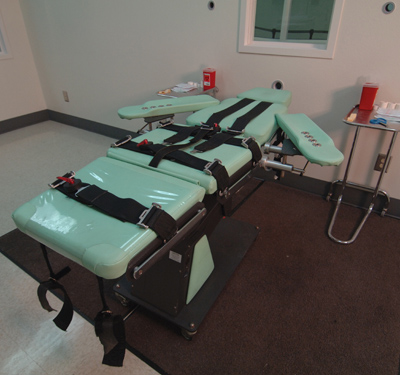 During my freshman year of college while around a group of my peers, I expressed an opinion about capital punishment that apparently wasn’t as common in mainstream Christianity as I’d previously imagined. I vocalized my opposition to the death penalty based not on moral or even biblical grounds, but instead founded upon financial concerns as well as overall questions pertaining to the actual purpose of capital punishment and whether or not it is effective at whatever it’s supposed to do. This prompted the reply from a fellow student, “You should read Genesis bro.” After decoding this very deep intellectual remark, I gathered that he meant to reference Genesis 9:6 which says, “Whoever sheds man’s blood, By man his blood shall be shed, For in the image of God He made man.”

At first glance this seems like a wrap, I mean there it is, plain as day in words that I understand and would find hard to confuse any other way. However if there’s anything that I’ve learned about the Bible throughout my academic career, it’s that honing in on one spot of Scripture and deriving hard and fast rules is typically a very poor method of interpretation. So let’s look before and after Genesis 9:6 really quickly to see if there’s any sort of context or cross-referencing to be had. You wouldn’t think there could be much else you could derive with only 8 chapters of Genesis but God’s dealing with Cain really intrigued me. Cain kills Abel in the fourth chapter of Genesis. Even a lot of non- Christians can identify this reference so it can’t be that obscure. As we’ve covered, God declares the punishment for those who shed man’s blood, but God didn’t kill Cain.

Why? Granted there are generations and generations of Adam’s offspring between Cain and Noah getting off the ark, but still this begs the question, does God have double standards or could he (gasp) change his mind? Here we have the first murder ever, literally the first recorded murder in the Bible, and what does God do? He doesn’t shed Cain’s blood, he gives Cain life without parole (considering metallurgy is a ways out, I’d say a curse more than compensates for an actual prison.) So apparently God thought that was a more fitting punishment than actual capital punishment. Interesting, to say the least.

Fast-forward to Jesus. In Matthew 26:52, right after some dude Van Gogh’s a slave of a high priest, Jesus interjects and says, “Put your sword back into its place; for all those who take up the sword shall perish by the sword.” Here we have someone in Jesus’ own posse who physically sheds mans blood (granted he didn’t die), and instead of going straight into the Old Testament reference, he says “Put your sword back into its place.” So much is said in such a short phrase. Jesus doesn’t exact his vengeance on the man, he conceivably forgives him instead and gives him the opportunity to sheath his sword. Am I saying we should just let first-time murderers off the hook? Not even remotely close. I more so just want to draw attention to God’s dealing with Cain, Jesus’ dealing with his hilt-happy follower, and that old “Thou shalt not kill” thing. Draw your own conclusions because I know you will.

OK, now if I was trying to argue my standpoint on capital punishment, I would include zero of what I just typed above. Not because I’m ashamed of my faith or that I’m embarrassed to be OK with adhering to ancient interpreted manuscripts, but instead because there are so many other good reasons to think twice about capital punishment that can appeal to everyone, not just the religious folk.

If you want to just skip the rest of my blathering at this point and just get the facts go to  I am more than OK with letting the evidence stand on it’s own, plus it’s only four pages long.

I just want to draw your attention to a couple items that I find to be serious areas of concern that hopefully makes you ask questions at the very least. The first one is the section labelled “Deterrence” on page three. Basically what it states is that 88 percent of former and current presidents of the top criminological academic societies reject the notion that capital punishment acts as an effective deterrent to murder. Along with that are the assertions that studies attempting to validate deterrent effects through capital punishment are “fundamentally flawed” and should not be used in policy making. Fun fact: the 2011 FBI Uniform Crime Report found that the South while having over 80 percent of executions happening within it’s boundaries, was also found to have the highest murder rate. Huh. That’s interesting. Fun(ner?) fact: The lowest execution rate and lowest murder rate belong to the same region, the Northeast. So if we’re not killing inmates because it deters crime, we’re probably doing it because our jails are full already and it’s easier fiscally to kill people instead of keeping them in jail for life. Right? Direct your attention now to the section labelled “Financial Facts About The Death Penalty” on page four of the link posted above.

If you consider that in 2000, enforcing capital punishment cost Florida $51 million above what it would cost to punish all (emphasis mine) first-degree murderers with life in prison without parole, then you probably aren’t under the impression that the death penalty is cost-effective. I hate to keep delivering “bad” news, but North Carolina has spent $2.16 million extra per execution in contrast to life imprisonment sentences, and Texas, unofficial champion of the death penalty has an average bill of $2.3 million per execution which is roughly three-fold the cost of putting one person in the highest security jail for 40 years (again emphasis mine). I’m pretty sure that nullifies any possible financial argument you could have for enforcing the death penalty. However, I could very well be wrong.

What am I saying with all of this? On personal, moral, biblical, factual, financial, and logical levels, I oppose capital punishment. Everyone has their own opinions so let’s remove personal, moral and biblical convictions. Factually and financially, capital punishment in the U.S has proven to be a detriment on society just as the very burden it was meant to alleviate is. Just because we can kill criminals doesn’t mean we should. Capital punishment is permissible, but is it beneficial? For me, almost all signs point to no, but don’t take my word for it. I might just need to read Genesis again.

Eli Sowry was born and raised in Southwest Ohio and spent the first 18 years of his life there. Today he is a student at Moody Bible Institute-Spokane where he is pursuing a Bachelor of Science in biblical studies with a minor in psychology.