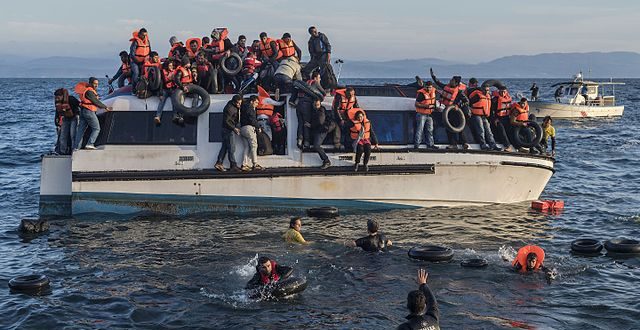 The current European migrant crisis is a crisis for many reasons. There is not enough aid for the immigrants, refugees, asylum seekers and migrants risking their lives to find safety and/or employment. Individual European governments, as well as larger structures like the EU or OSCE, have not been able to provide adequate food and shelter to the families coming to their borders. European nation states have not been overly welcoming to these incoming populations and some such as France, have opted to close their borders. Others such as the UK demonstrated such disdain of the EU in handling this crisis that they’ve opted to leave, i.e. Brexit, you may have heard of it.

It’s important to look at the driving factors behind many European citizens’ disapproval of incoming migrants. It’s also important to note that the negative reaction toward incoming immigrants is what has been largely covered in the media. Many Europeans have been completely open in welcoming refugees into their homelands—take, for example, Germany where many citizens have even offered free housing to families. However, today we aren’t focusing on the positive.

One of the biggest reasons for the anti-immigrant sentiment is the economy. Currently Europe as a whole is floundering economically and 2017 doesn’t offer much of an upturn. The European Economic Forecast for Winter 2016 (I know, it’s a mouthful) is explicit in stating that while Europe will see some improvement in individual economies and the regional economy, it will be a slow progress. It goes onto say that Europeans are struggling to find long-term employment, a crucial staple in a functioning economy.

Employment is particularly bleak for the younger generations which has created a lot of frustration. To add to that, many Europeans feel that if their individual nation states and the EU cannot even provide for them, how are they going to be able to provide for the large numbers of incoming immigrants? There is this valid sentiment that immigrants may eat into Europeans’ economic pool, one many feel is close to drying out to begin with.

“However, as the processing of asylum applications varies significantly across countries, the absorption of accepted refugees into the labour market will likely remain gradual,” The European Economic Forecast reports.

This quote from the 2016 report is crucial to note because it goes directly against many of the fears Europeans have about too many refugees coming into Europe and drowning their economy. The idea that every refugee crossing Europe’s borders is taking an immediate bite into European nation states’ resources, is simply not true. However, it is the perception of truth that matters in this situation. And it is the perception of Muslim immigrants specifically that has caused this wound to become inflamed.

An overwhelming percentage of the migrants fleeing to Europe are Muslims, stemming from Muslim countries, with Muslim cultures. Many of these migrants have grown up under a theocracy (a government ran under religious influence) and are now trying to establish themselves in some of the most liberal and anti-theocratic countries in the world without losing their identity. This been met with fierce resentment in much of Europe.

Many Americans do not understand the extent to which most of Europe is secular (a government run void of any religious influence). While Americans would largely say their government separates church and state, we are still very much a nation influenced heavily by Christian doctrine. God is in Pledge of Allegiance; our most important founding documents were created by our Founding Fathers “under God”, every one of our presidential candidates’ campaign speeches end with “God Bless America.” Christianity is more integrated into our daily lives than most of us realize. That’s not the case for most of Europe!

“If the two can have a dialogue. And what is a dialogue? It’s not a debate, because in a debate, one wins another one loses. But in a dialogue, if you win I win, if you lose I have also lost. It is learning from one another…that’s what adversity if for,” says Rev. Patrick Baraza, a Kenyan Catholic priest, who had the unique experience of growing up in a religiously blended family of Muslims and Catholics, and has dedicated his life to Islamic studies.

But maybe that’s the problem. Unlike America, much of Europe does not tout the ideal that their countries are melting pots. Therefore, many governments have not felt the need for dialogue with the incoming immigrants. While they have allowed immigration to their countries, there’s much more of a push toward assimilation. If you come to Britain, be British. If you’re coming to France, be French. If you’re coming to the Netherlands, be Dutch. If you’re coming to Hungary, they probably won’t let you in in the first place. Most European identities also assume you’ll be secular. But that hasn’t happened as smoothly as many European governments expected, which is why we’ve seen a spike in religious and cultural tensions throughout this migrant crisis.

As of October, racially and religiously motivated hate crimes in the UK after Brexit have risen a staggering 41 percent. And the UK isn’t the only European country to see this trend. Note that this rise in hate crimes only accounts for those that have been reported.

“Today, the majority of hate crimes – whether against Roma, LGBT people or members of Muslim or Jewish communities – remain unreported, unprosecuted and therefore invisible, often leaving victims without redress for their suffering.” (EUAFR 2016) Where is the animosity toward these immigrants in Europe coming from? Is it Islam? Is it Catholicism? Is it both or is it neither?

This battlefield in Europe is getting uglier day by day. There are new videos surfacing daily depicting immigrants, many of them Muslim, being verbally or physically attacked while on public transportation, shopping or simply commuting from one place to another. People are scared, on both sides of the aisle.

Europeans are trying to hold onto their prized identities and so are the Muslim immigrants who’ve immigrated to Europe in hopes of not losing more than they already have. It’s a complex, painful, highly emotional dynamic between these two groups right now. But Baraza has not lost faith in either of them.