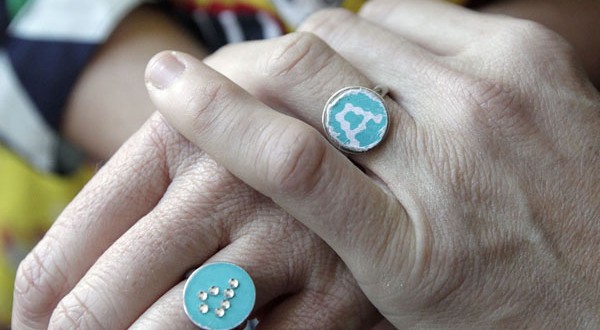 (RNS1-dec26) Newlyweds Pidge Winburn and Amy Fowler celebrated Christmas Day brunch with friends at their home. The two show off their wedding rings that a friend got them; an A for Amy and a P for Pidge. The two were married on Monday (December 23). For use with RNS-UTAH-MARRIAGE, transmitted on December 26, 2013, Photo by Leah Hogsten | The Salt Lake Tribune

The “Utah compromise” was hailed by some as a groundbreaking balance of religious liberty and LGBT rights. But now, as Indiana Republican leaders examine whether such a policy could be introduced in the Hoosier state, business leaders are roundly rejecting the concept.

It’s too late, they say, for that kind of compromise to work in Indiana.

“After RFRA,” said former Angie’s List chief Bill Oesterle, “that’s a horrible half-solution.” He is referring to the battle over the Religious Freedom Restoration Act in July.

Utah law now lists sexual orientation and gender identity as protected classes in housing and employment — but, without buy-in from the religious community, it does not include “public accommodations,” a broad legal term used to describe everything from bus services to restaurants and other private businesses.

Legislation modeled after the Utah law, Oesterle said, would be “completely unpalatable to me.” And lawmakers, he added, would be naive to think those weaker laws would be enough to repair the state’s battered reputation.

He, and others including Eli Lilly & Co. and the NCAA, say they want stronger protections of LGBT rights than the Utah compromise afforded —  including in businesses open to the public.

And there’s no indication that the Utah compromise would please opponents of LGBT rights, either.

Experts across the country say this polarizing problem necessitates compromise, but meanwhile, both sides snipe at each other for refusing to give an inch.

Still, some in Indiana say that no-compromise attitude is more likely to backfire on the most zealous defenders of religious liberty.

That could force the issue — and put Indiana in a position that politically demands full protections.

Public accommodations include any business or service open to the public. In the civil rights movement of the 1950s and 1960s, some of the most well-known examples of discrimination in public accommodations centered on water fountains, bathrooms, buses and seats at the lunch counter.

But today, the battleground is wedding services. Should a business owner, who follows a religion that disapproves of gay marriage, have to serve gay customers who request wedding cakes or photographs?

In Washington state, the law prohibits discrimination based on sexual orientation in public accommodations. That’s what formed the basis of a widely publicized case against Arlene’s Flowers, a business sued by the state for turning down a gay customer’s request for wedding arrangements.

A judge fined the business for violating state law.

In Indiana, she said, she has fielded inquiries about the Utah model from Gov. Mike Pence’s office and the team of Al Hubbard and Mark Miles, two influential Republicans working on an anti-discrimination proposal.

But some businesses rebuffed the idea of any proposal that lacks protections in public accommodations, emphasizing that they are advocating for full protections for everybody.

“We stand for equal protections for all Hoosiers, including Hoosiers in the LGBT community,” said Edward Sagebiel, Lilly’s senior director for global corporate communications, reputation and branding.

“Our commitment to fair treatment of all employees, regardless of sexual orientation or gender identity, has not changed and is at the core of what we believe in,” said Bob Williams, senior vice president of communications for the NCAA. “We intend to stand strong with our colleagues in the business community as the fight for equal protections under the law is fought for everyone in the state of Indiana.”

Many agree the bitterness over RFRA — and damage to the state’s reputation — still lingers.

In Utah, perhaps the most noteworthy advancement of LGBT rights was the inclusion of nondiscrimination protections for transgender people.

And, for the religious liberty side, the state created a workaround for county clerks to opt out of providing wedding services. Clerks had to figure out which of their employees would religiously object and put into place other arrangements for an authorized official to solemnize marriages — all planned out before a problem would ever arise.

That way, nobody says no to a couple. No couple gets turned away.

So, can a similar workaround be done for public accommodations?

Allowing businesses to turn away gay couples, Wilson said, even if they provide a list of other places willing to provide the service, feels too much like the Kentucky clerk Kim Davis refusing to issue marriage licenses.

“It will feel as offensive as those two guys standing there at her desk being told to wait,” Wilson said.

“There’s so much harm in saying no,” she added. “Even if you and I know we can go across the street. It’s very, very close to saying, ‘I do not like you.’”

Just as the Utah compromise isn’t enough for many Indiana businesses, it may not satisfy religious conservatives, either.

The Alliance Defending Freedom, a national conservative Christian organization, said it’s a “misnomer” and a “farce” to say Utah’s laws forged a compromise.

Litigation counsel Caleb Dalton said he felt as though the religious community did not win many more protections than already afforded under constitutional law.

The Utah legislation wrote in exemptions beyond religious organizations such as churches or parochial schools, to also include any affiliated nonprofits or auxiliary building.

The nondiscrimination law also explicitly preserves First Amendment rights to freedom of expression. That means employees can’t be fired, for example, for supporting anti-abortion causes or going to a gay pride parade.

But Dalton said he would want to see legislation that recognizes people’s “freedom to live and act according to their faiths.”

Ultimately, it all comes back to the underlying question: Can religious liberty and LGBT rights coexist in Indiana?

“Essentially, they say, ‘If I disagree with something as a matter of public policy, it violates my religious liberty.’ That’s an unworkable definition of religious liberty in a pluralistic society. It runs the risk of making the individual religious believer a law unto himself, or unto herself.”

The religious right, he said, have appropriated the term to make an emotional appeal.

Though it’s too early to say what any kind of proposal in Indiana would look like, it’s clear compromise is on the minds of those working toward a solution.

(Stephanie Wang writes for The Indianapolis Star. Chris Sikich contributed to this story. )