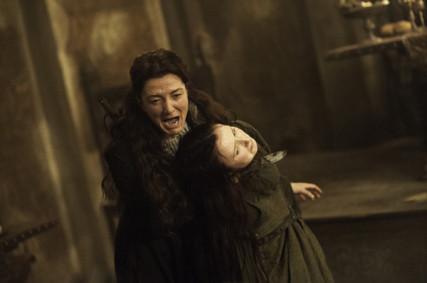 Can a Christian watch ‘Game of Thrones’?

Is there anything morally redeeming about “Game of Thrones”? Does the hit HBO series even have a moral vision?

The show is certainly entertaining, almost addictively so, and as “Games of Thrones” wraps up its third season on Sunday (June 9), the ratings reflect that popularity: a record of more than 5.5 million viewers have followed the ruthless struggles for power among the teeming clans of Westeros, the medieval-looking world created by fantasy novelist George R.R. Martin.

That success has also guaranteed that the show will be back for a fourth year of mayhem and passion, swords and sorcery, despite this season’s many violent endings. Or, as one tweet put it after the bloody penultimate episode: “Why doesn’t George R.R. Martin use twitter? Because he killed all 140 characters.”

But therein lies the moral problem for some: The appeal of the series seems bound up in the senseless violence and amoral machinations – not to mention the free-wheeling sex – that the writers use to dramatize this brutish world of shifting alliances and dalliances.

That, in turn, has prompted intense debates about whether Christians should watch “Games of Thrones” at all, or whether the show’s only possible virtue is depicting how the world would look if Christ had never been born – or what it could look like if Christianity disappeared tomorrow.

“Why should Christians watch ‘Game of Thrones’? There’s no necessity, and some will find the gratuitous sex and violence dangerous and damaging,” wrote Daniel Muth of the Living Church Foundation.

But, Muth concluded, “Seeing the hopelessness and savagery of what this age threatens to become may serve to shake us from our torpor.”

To be sure, “Game of Thrones” can be as “relentlessly grim” as Jonathan Ryan described it in a Christianity Today critique. As one character puts it: “When you play a game of thrones, you win or you die.”

Dark magic plays a role in the plots, yes, and there are hints of something supernatural, if not altogether benign. But for the most part, the land of the Seven Kingdoms is a dog-eat-dog world dominated by soulless connivers like Lord Baelish, who concludes one chilling monologue by declaring: “Only the ladder is real. The climb is all there is.”

Which is not to say that the world of “Games of Thrones” doesn’t have religion. In fact, it has several of them. But belief is slippery and divine justice improbable. Even those who hope there is something at the other end of the ladder – a realm above – fear that it is populated by cynical gods who view mortals the way cats regard a mouse, as something to be toyed with until it dies.

“The gods have no mercy. That’s why they’re gods,” as Queen Regent, Cersei Lannister, coldly tells terrified young women praying for help during a siege.

For some, the most damning aspect of “Game of Thrones” may be the way that it subverts the work that it most closely tracks: J.R.R. Tolkien’s “The Lord of the Rings” saga that’s beloved by so many contemporary Christians.

In those novels, and the hit films they inspired, Tolkien also presents an epic struggle – but one in which good battles evil, and triumphs in the end. George R.R. Martin is having none of that.

“The sort of fantasy where all the people get together to fight the dark lord doesn’t interest me,” Martin told The New Republic when asked about comparisons to Tolkien.

“We don’t tend to have wars or political controversies where one side is really ugly and wears dark clothing, where the other side wears white and has glowing magical swords,” he said.

(Martin, who is helping to adapt the television series from his series of novels, “A Song of Ice and Fire,” is busy shooting the fourth season and was not available for further comment.)

But ambiguity is not necessarily amorality. It can also reflect the complexity of real life.

“What constitutes good and what constitutes evil? What happens if our good intentions produce evil? Does the end justify the means?” Those are the questions Martin says he is asking, and they are questions that have spawned a cottage industry of blogs and even a book about the philosophy behind the show.

Still, some have also detected a genuine theological framework behind the show that does not reject Christian teachings but instead reflects them in important ways.

“Indeed, the series can be read as an argument for Reinhold Niebuhr’s Augustinian realism,” George Schmidt wrote at Religion Dispatches, citing the Cold War theologian who has often been invoked during America’s current battle against terrorism. As Schmidt notes, idealists who would triumph in Tolkien’s world are blithely cut down in Martin’s.

The Rev. Jim McDermott, a Jesuit priest who is studying screenwriting at the University of California, Los Angeles, also pointed out that in “Game of Thrones,” raw power and high birth provide no guarantee of protection. And, like the Bible, the series finds unlikely heroes among “the shattered, the shunned and the disregarded.”

The realism that McDermott finds in the show is the gospel truth that life is often hard and unfair – but everyone shares in that fate.

“And salvation is not the purview of some elect, nor does grace inherently reside in a crown,” he wrote in America magazine. “As with horror, so hope springs from the most unexpected of quarters.”

Or maybe not. The story lines continue to unfold, and Martin hasn’t yet finished the final book that will serve as the template for the rest of the series. Strong characters and unpredictable narratives are sure to keep coming, and to keep viewers glued to the screen. But at the end will they find a “transcendent moral vision”?

“Thus far (Martin has) been fairly scornful of the idea that the end result of the political struggle is the establishment of social justice, and seems to be suggesting that, in the end, all succumbs to dust and entropy, or that on the whole those willing to give themselves wholly over to their will to power will ultimately prevail,” Paeth wrote on his blog.

“How he ends his story will tell us much about the moral world in which he dwells.”

Previous Are you a good witch or a bad witch?
Next How change is made