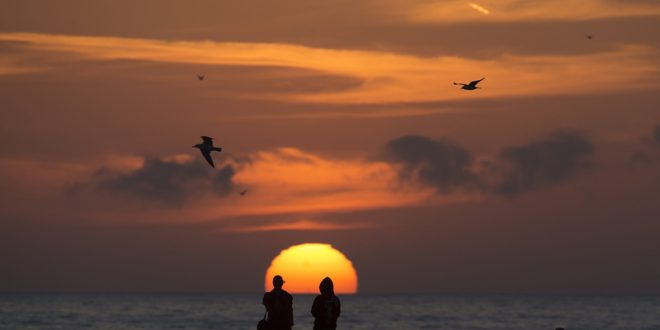 People sit on the beach and watch the sun set as seagulls fly over head in Santa Monica, California on February 27, 2016. Photo courtesy of REUTERS/Carlo Allegri *Editors: This photo may only be republished with RNS-CALIF-RTD, originally transmitted on June 7, 2016.

(RNS) Somewhere in California on Thursday (June 9), a gravely ill person may lift a glass and drink a lethal slurry of pulverized prescription pills dissolved in water.

That’s the day the nation’s most populous state implements a law, passed in 2015, making physician-assisted dying accessible to one in six Americans, according to its national backers, Compassion & Choices.

Advocates cheer this “End of Life Option,” the formal name of the law. That’s a less jarring name than the “Death with Dignity” label given to similar laws already in effect in Oregon, Washington, Vermont and Montana.

It’s normal for people to have options, right? They say.

“Normalizing” this process is the term big with supporters. It conjures a sense that this is the last autonomous act of a person who, two doctors must certify, is six months from death’s door. Although the option is a multi-step process that can take a few weeks, it can short-circuit months of intractable pain and suffering.

The real killer, in this view, is the terminal illness or injury. A lethal prescription, which only the patient can administer, merely changes the timing.

That was the view of 29-year-old Brittany Maynard, one of people who inspired the California law.

In 2014, she was a California newlywed who refused to allow an incurable brain tumor to overtake her last days. Instead, Maynard moved to Oregon to have access to that state’s first-in-the-nation right-to-die legislation.

There, she died as she had planned, leaving a legacy of videos, created with Compassion & Choices.

The last word in one Maynard video was “advocate.”

Physician-assisted dying already has a foothold of national public support. Surveys show most people — of all faiths and none — support this as long as there are adequate legal safeguards.

Gallup, in a national poll in May 2015, using the hot button word “suicide,” found 68 percent of U.S. adults said, “When a person has a disease that cannot be cured and is living in severe pain, doctors (should) be allowed by law to assist the patient to commit suicide if the patient requests it.”

Manansala, who is Catholic, cited the statement from Jesuit-seminary-trained California Gov. Jerry Brown, when he signed the law.

Brown said that after deep reflection and wide, diverse consultation he concluded: “I do not know what I would do if I were dying in prolonged and excruciating pain. I am certain, however, that it would be a comfort to be able to consider the options afforded by this bill. And I wouldn’t deny that right to others.”

Neither does the law impose participation on people who object. It was elaborately constructed to allow physicians, pharmacies and health care systems to “opt out” on conscience grounds.

The next step, said Matt Whittaker, Compassion & Choices state director for Oregon and California, is to ensure access in a state where the two largest faith-based health care systems, Catholic hospitals and Adventist Care hospitals, have announced they will not participate,

Other large California systems such as Kaiser Permanente and the Sutter Medical Foundation, the two largest HMOs in the state, are setting up procedures for doctors who decline the option.

“People should be able to go to a doctor and have these conversations without facing institutional impediments,” Whittaker said.

Even as California deals with implementing the new law, advocates are stepping up efforts in state after state.

New York — where similar legislation passed a health committee in the state assembly in May —  could be the next “significant win,” said Manansala.

New Jersey lawmakers will likely hold hearings this summer and Utah has scheduled hearings for July, she said.

In Colorado, a signature campaign is underway to put a referendum, Initiative 145, on the November election ballot.

However, a bill similar to California’s has failed twice in committee in Maryland where a coalition of religious and secular activists formed to lobby against it.

Across the country, the Catholic bishops, Mormons, and conservative evangelicals have condemned the bill in one legislature after another. They say humans cannot usurp God, author of life and death in orthodox Christian religious teachings and many eastern faiths.

Secular opponents say the critically ill don’t truly have autonomy. By the time they are eligible for the “option,” they’re in a fog of fear and pain and vulnerable to outside pressures.

Elena Boisvert, an Annapolis, Md., attorney specializing in elder law, testified against the bill because, “every day, I see the most incredible acts of greed by kids who abuse and rob their parents blind.”

Boisvert said such laws “are creating incentives to say, ‘Mom, Dad, maybe you really do want to leave the planet a little earlier than otherwise.’”

Equally horrific, in their view, such laws put society on the road to euthanasia — direct killing — that is already legal in parts of Europe for the mentally ill, even for children.

A new movie in American theaters, “Me before You,” concludes, (spoiler alert!) with the smart, handsome disabled man, one with all the love and support he could want, choosing to die in Swiss “suicide hotel.”

Ultimately, opponents say the right-to-die movement has a force beyond the exact confines of any particular state law. It legitimizes suicide culturally – with potentially tragic implications for the mentally and emotionally distraught.

Mouw cited comments in The Christian Century by a Dutch Christian ethicist, Theo De Boer, who has seen legalized suicide in the Netherlands shift from strict regulation to loose application, from a rare choice made usually for cancer patients to one commonly chosen by people terrified of encroaching dementia.

“One in 25 deaths in the Netherlands is the consequence of assisted dying,” De Boer wrote. “Terminal cancer now accounts for fewer than 75 percent of the cases. Many of the remaining 25 percent could have lived for months, years, or even decades. In some reported cases, the suffering largely consists of being old, lonely, or bereaved.”

Mouw said despite his deep empathy for people who are suffering, he has little faith in California’s law, which expressly forbids euthanasia.

Although the law also specifies that the “option” may not be called “suicide,” that doesn’t mean it eventually won’t lead to more people choosing death — by this law or other means. It acts in the culture to “normalize” the notion in ways that politicians can’t control, said Mouw.

Joni Eareckson Tada has stepped up her decades of lobbying against such laws, saying Jesus’ love and the belief that God is with her in this life and beyond gives her strength and comfort through cancer, chronic plain and quadriplegia.

Pastor Dave Watson, of Calvary Chapel on Staten Island, is fighting the bill in his state and beyond because “it is not just one person’s private business. Its a moral absolute: It is wrong to destroy your body.”

His columns for the Staten Island Advance spell out how Compassion & Choices — originally founded decades ago as the Hemlock Society — offers a secular vision of autonomy-at-all-costs that doesn’t square with a biblical worldview.

Everyone in this Judeo-Christian country, needs to rely on “a source beyond yourself that is true in all times and all places” said Watson.

Decisions at the end of life are never easy.

Most people have not discussed how they want to be treated. Many don’t understand their prognosis. And often patients who can no longer speak for themselves are supported by family members or other surrogates who don’t understand – or won’t accept – a dying prognosis.

But in California all this moves from theory to reality. The state government will post the official forms. The countdown will start for patients and physicians.

If asked to write a prescription for the deadly potion, Dr. Timothy Gieseke, a northern California physician and palliative care specialist, will refuse.

Too many people, particularly the poor and marginalized in society, have not had access to the best in care that can alleviate pain and ease suffering.

Even so, Gieseke acknowledged, “If I were convinced in my own mind that I and my team had exhausted optimal palliative care, I would likely refer someone” to a prescribing doctor.

The family medicine specialist and assistant professor of medicine at Stanford Health Care at Los Altos/Stanford School of Medicine, said she’s long been aware of desperately ill patients moving to Oregon or Washington to die with medical assistance.

By the beginning of June, she said, she was already hearing from patients expressing interest. She’s deeply involved in training Stanford faculty – “the willing and the unwilling” — in understanding all the options at the end of life, including aid in dying.

“What is wonderful is that we are moving toward ways to ease suffering. We are finding legal ways for people to have the dignity of defining how they live their last days. Monumentally, this is about what medicine is about at the end of life,” Forest said.

“I can’t stand in judgment,” she concluded. “These people are dying. Now, I can decide in the privacy of my office with my patient what is next.”

Previous Holy hip-hop: The amazing world of rapping clergy
Next VIEWPOINTS: Does it make you a bad parent if your child misbehaves?