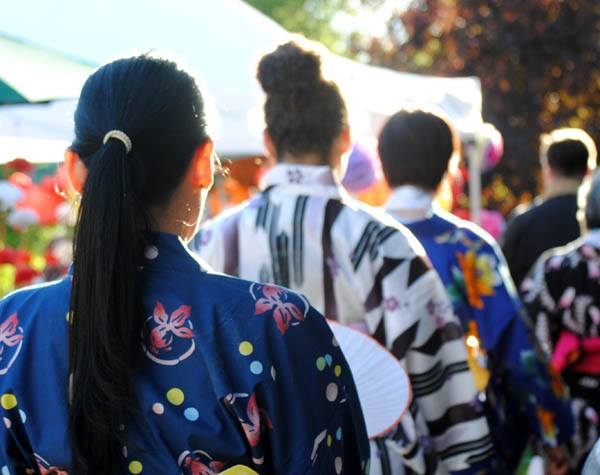 The sound of Taiko drums echoed through the Perry District this weekend, each beat sending a message of thanksgiving to those who have gone before us.

For the first time in two decades the Spokane Buddhist Temple hosted an Obon Festival, a traditional Buddhist holiday honoring the spirit of one’s ancestors.

The festival is celebrated in July or August in most temples across the globe, explained the Rev. Christine Marr.

A new member who worshiped in a California community for several years is credited for bringing the event back to Spokane.

“We were already doing the more somber side by remembering our ancestors during a cemetery service,” Marr said. “This is the celebrating we’re alive part, thanking our ancestors.”

Not only did the fest include children’s games, cultural food and temple tours, Spokane Taiko — a Japanese drumming circle — performed traditional music throughout the event.  Their rhythms lured neighbors and passersby to the temple’s green.

More than 100 people of various faiths and ages attended the event, encourage temple board members to announce that the Obon Festival would become an annual occurrence.

It concluded Sunday with Odori (dancing), which is a dance of joy, paying tribute to forbearers.  Temple members practiced for weeks learning the dances, and invited everyone to join in.

View a photo album of this event on our Facebook Page.

Previous Are atheists smarter than believers? Not exactly.
Next Oban Festival