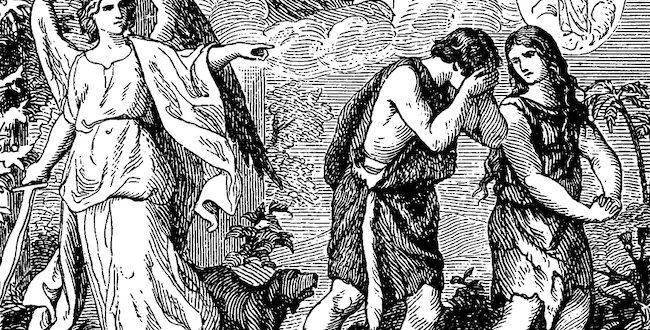 Adam and Eve being expelled from the Garden of Eden/DepositPhoto

Several FāVS columns, including one by our remarkable editor, Tracy Simmons, have asked us to consider the essential goodness in everyone, including those who have views we abhor and whose behavior may have hurt us (see Tracy’s 12/21/21 column,  “Lessons from Buddha on how to see good in other people…”). According to Buddhist teachings, we all have a Buddha-nature which gives us the potential to become fully awakened.

So here I am, a latter-day Grinch, to proclaim as well the essential sinfulness of us. Not that I don’t think people are good. It’s just that I think that we are also flawed, that in the famous formulation of Martin Luther, we are all simultaneously sinners and saints, and that there is value in acknowledging our sinfulness.

In Christian tradition, our sinful nature dates back to the “Original Sin” of our ancestor Adam. “A” is for “Adam,” learned Puritan children in the New England Primer, and “In Adams fall we sinned all.”

Jewish scholars rightly point out that there is nothing in the Genesis story of Adam and Eve eating the forbidden fruit that suggests that their deed resulted in humanity having a fallen nature. The seed for this notion was planted by Paul in his New Testament letters and fertilized by St. Augustine and other Church Fathers.

Down through the centuries this Christian doctrine has doubtless done harm, causing people to look for evil in others and to punish it. Nathaniel Hawthorne, a descendent of the Puritans, critiqued them in “The Scarlet Letter” and other stories for forgetting the “all” in the Primer rhyme. He might have cited Jesus’ question, “And why seest thou a mote in thy brothers eye, and considerest not the beame that is thine owne eye?” (Luke 6.41; 1602 Geneva Bible).

This is one version of the original sin: blindness to one’s own faults as a result of ego-centrism, leading to selfishness and harness of heart. These may not be attributed to poor old Adam but just to our own flawed nature.

Ralph Waldo Emerson offered another interpretation of humanity’s Fall: “It is very unhappy, but too late to be helped, the discovery we have made that we exist. That discovery is called the Fall of Man” (“Experience” 1841). To support his interpretation, Emerson might have pointed to Adam and Eve’s shame-full awareness of their nakedness after eating the forbidden fruit.  Instead, Emerson pointed to his and his culture’s introspection and to its sense of separation from the rest of nature.

From a Native American perspective, this sense of separation is an original sin of Western culture. Rather than seeing other animals as our relatives with much to teach us, they are seen as commodities to be exploited.

This sense of separation also reflects and fosters dualism, a division of people into us and them, into civilized and uncivilized. Dualism, along with greed, lead to two of American’s greatest original sins, the genocide of “uncivilized” native peoples and the enslavement of “uncivilized” Africans.

White Americans are often unwilling to acknowledge these foundational sins. This is our real “cancel culture.” We are unwilling to face the truth about our past.

The recent passing of Archbishop Desmond Tutu should remind us of his call to face the truth during his work on South Africa’s Truth and Reconciliation Commission. Those who committed crimes during the years of apartheid were encouraged to confess and seek forgiveness, while victims were invited to forgive.  As an archbishop of a faith that sees value in the doctrine of original sin, Tutu knew the power of repentance and forgiveness and hoped that his country as a whole would benefit from the process.

As would our country. A serious consideration of reparations is also in order.

Tutu and His Holiness the Dalai Lama were dear friends. Their great sufferings led to great compassion for others. They rejoiced in their Buddha-nature and shared communion.

Both affirming our Buddha-nature and acknowledging our original sins may promote a better world. At the very least it would put us in very good company.