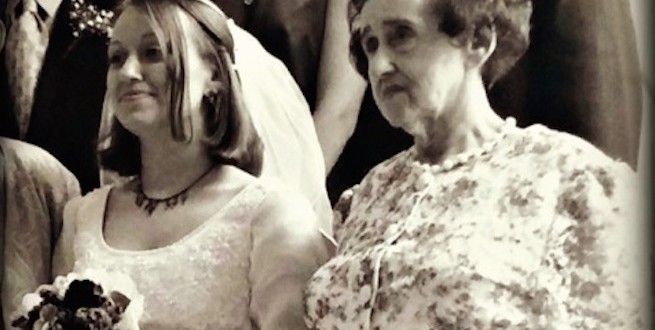 “Bubbe is the reason we are observant Jews”

Bubbe is the reason we are observant Jews.

When our children were just promises in the distant future, my husband and I struggled to figure out how we wanted to raise them. Early in our marriage, we had a menorah in the window and a mezuzah on our doorpost, but that was the extent of our religious observance.  We wanted children, but how would we raise them? Jewish? Secular? Nothing at all? We leaned towards the last two.

One day, not long after we were married, I watched an elderly woman light Shabbat candles with her grown children.  Since we had never been observant, it wasn’t something I often had the chance to see. The more I thought about that scene, the more I felt that this was our children’s birthright.  It struck me that my husband’s grandmother had done that in Nazi Germany.  As a child, she lit Shabbat candles in Germany with her mother.  She had suffered so much because she was Jewish and, at the time, none of her grandchildren planned to raise their children Jewish. I was bothered more than I expected to be by the idea of not handing that tradition, or even any Jewish traditions, down to our children.

I have always adored my husband’s grandmother (Bubbe).  She was a funny older woman who pronounced “Vegetables” with a W, kept the heat up way too high in her apartment, and was always happy to see us. My husband and I had only been dating two months when I found out she was a Holocaust survivor. She escaped Nazi Germany just before her 16th birthday. When my husband first told me that, even though we had only just started dating, I turned to him and said, “That’s amazing! We have to name a daughter after her.” Two years later, we were married. Three years after that, we welcomed twins including Ellie, Bubbe Elsie’s namesake.

Thoughts of Bubbe and our future children started me down a path of learning more about observance. I read every book I could get my hands on. I took advantage of Jewish adult education opportunities.  I talked to rabbis. At the time, we lived far from a Jewish community, so I spent a good deal of time e-mailing a rabbi two hours away. I was also able to talk to others on message boards and research online.

As we learned about observances, we tried them out. We started keeping some semblance of kosher. We observed Pesach. We fasted on fast days. Though it required a long drive, we started occasionally going to Friday night services.  We lit candles every Shabbat.  When I went to visit my husband (for a time, he was stationed 2,000 miles away), I always packed Shabbas candlesticks and candles in my carryon. The Air Force moved us far away from family just before our twins were born. There we joined a synagogue.  When they were born, I whispered the Shema in our girls’ ears. It was the first words I ever said to all of our children after their births. When our twins were in the NICU, I sang them Hebrew songs. Our girls had a brit bat (a welcoming ceremony).  Over the years, our observance has increased to the point where we consider ourselves traditional Jews.

We’ve raised our children wrapped in Judaism. They understand the value in Jewish ethics and history. We’ve tried to show them that there is value both in their future and in our family’s past. They speak Hebrew. They read Hebrew. We’re at services every Saturday. Our 5-year-old can (and does) chant prayers in services right along with the adults.  Our twins had their b’not mitzvah this past summer. Our son will read Torah for the first time this weekend—the first Shabbat after Bubbe’s death.

Bubbe died the morning of Dec. 24—on her 92nd birthday.

Though she has been ill for a very long time, her loss is still heartbreaking and shocking. The thought of a world without her feels empty. She endured so very much. She lost so very much. Yet she survived for so very long. I only hope the stories we tell about her can continue her blessings.

Bubbe gave us the incredible gift not only of her life and her presence, but of the comfort and connection we all find in Judaism.

May her memory be a blessing.

Previous A pastor’s accidental Facebook post serves as a reminder to consider our words
Next The Resurrection Series: The First Accounts