Bringing Good Friday to the streets 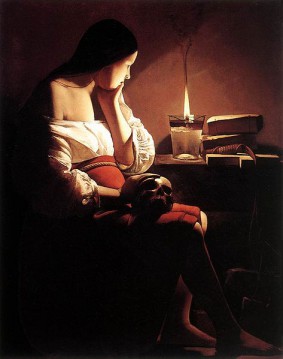 “We're not those kind of people,” said two women entering the nude bar.

It was ironic hearing those words jump out of her mouth as she quickly turned away from our sidewalk sanctuary altar she had paused to peek upon. But like a frog from a hand, she and her girlfriend in two steps looked and skirted away, uttering this phrase that’s so often used in reverse, in my circles.

“We’re not those kind of people…”

We were ‘those kind’ of people last night. We set up St. Jacob’s Suburban Sanctuary on East Sprauge again. On Thursday we provided a place for foot washing, but this time an altar hosting the Holy Eucharist. It’s called different names to different group — Communion or The Lord’s Table but there on a cold holy good Friday night, it was called, “No thank you”.

For about an hour and half, we stood out in the dark street next to the Captain Ron’s “HOT” Rainbow Bar and Grill. The hand drawn tired poster-board sign on the business wall mumbles, “Girls, Girls, Girls”.

One of the commenters on a Spokane restaurant/bar review site says:

“Hole in the wall biker type bar, some nights you can find a has-been stripper (think too old/ugly for deja vu anymore) dancing in pasties and a thong, who will ask if you want company for the price of buying her a drink. Bartender is friendly.”

The Inlander, Spokane’s alternative newspaper says, “You haven’t really lived in Spokane until you’ve seen at least one pastied nipple at the Rainbow.”

The conversation on the sidewalk around us went like this:

Drunk Mormon, “I can't, that would be sacrilege”

Mormon Rainbow Bar employee, “No thanks, I already went to church once this week”

Nude dancers to one another, “You need to go over to those people.”

Rainbow Bar employee, “We used to have a Christian group in here on Sunday's once a week…but…”

Homeless Man we dropped off at the Union Gospel Mission Shelter, “Thank you.”

Unlike the night before, last night a few of the dancers came outside the bar, they huddled by the door, smoking, chatting and looking at our saintly spectacle of candles, lights, Gregorian chant music and The Eucharist. The business attire at the Rainbow includes a few threads, and I guess the business provides a blanket to the ladies when they want to go outside in the cold to get their nicotine fix during breaks. It’s not often a I stand between The Eucharist and the pastied breast as an officiant of Communion. The tension of it all was tangible but inviting.

Communion is a word we get from the Latin that means share in common. Standing there looking at one another from a short distance, two lives encountering a sacred table, a common need, a hunger and thirst. Both lost, both needing to be saved. One human experience unfolding, two stories touching for a moment but the space between us felt like eternity.

The ache of redemption was heavy on my soul as I stood there in the dirty water of the street. I was backed up almost into traffic, not wanting to block the view of the altar if anyone came out or into the bar. Slightly out of view and off the sidewalk, so as not to impede anyone from wanting to examine our sanctuary. Praying in words of my heart and mind, and in words of the spirit.

Longing, like a father for his daughter, hung in the words of the prayers. God’s heart present in the fragments of the table and the broken reality we were facing.

I was there because I know Jesus has a tender heart for ‘women of the city’ as Luke described them (Luke 7:37). How could he not, Rahab, one of his great, great, great something grandma’s was a hooker and she had her own ‘Captain Rons’ in Jericho. I was there looking for the scarlet thread because I know that sometimes salvation is found in the most unlikely places; it’s one of the things about God I like.

There’s something sobering about being present in the place and presence of people in need of grace and forgiveness. Praying on site gives insight into the purpose of the church and the gospel in a neighborhood. When you see a face, or in this case, a barely clad woman gangling down the sidewalk in a thin blanket that’s teasing more than protecting your supplications have an authenticity that only the moment could bring to them.

At the close of our time there not one sip of the cup had been taken. Bill, my other companion on the journey that night, asked ‘Junior’ a homeless man standing there, if he wanted a drink. He said “no.” So, Bill leaned down and poured it out on the concrete. I watched it slowly spread out over the grime of street life, mixing with the spit, ashes, condoms and garbage.

I guess it was fitting, that on Good Friday, the night when Jesus was crucified, forsaken by God, that no bread was eaten, no lips touched the cup. But instead the cup, was spilled out.

Previous Fascinated by Fire
Next Celebrating unity on Good Friday