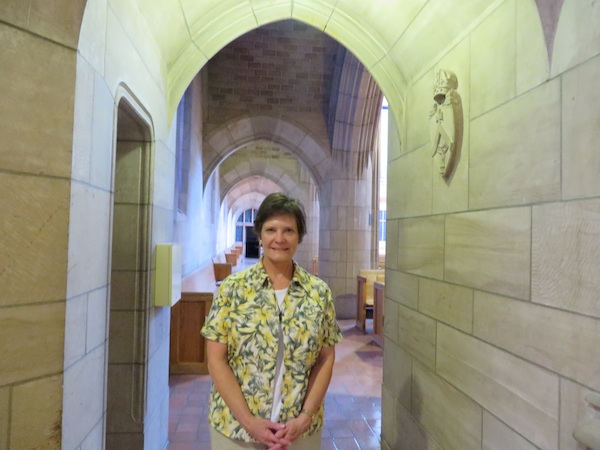 Though the church service held many similar elements to others — prayers, worship songs and communion — two differences stood out. The service was a Celtic Eucharist and is an original creation of the Rev. Elaine Breckenridge.

Breckenridge first discovered Celtic Christian spirituality when she moved to Spokane in 2004. Upon her arrival, she sought out a spiritual director. The woman, a Roman Catholic nun named Jane Comerford, gave Breckenridge a book titled “Listening For the Heartbeat of God” by John Philip Newell. The book made a huge difference in her life, Breckenridge said.

In Breckenridge’s former congregation, a group of women attended a Celtic circle run by Comerford. They met once a month to learn more about Celtic Christianity.

“I was surrounded by a nucleus, a small group of people, who were interested in it,” Breckenridge said.

The clincher for the whole experience occurred in 2007, Breckenridge said. She traveled to Ireland on a pilgrimage led by Comerford, visiting sites and getting immersed in the history. The trip got her thinking about the idea of thin places. A thin place is a moment in space where the barriers between humanity and divinity merge and the individual feels like they are in union with a power greater than themselves, Breckenridge said.

“I experienced that feeling many, many times in Ireland,” Breckenridge said. I walk by the Spokane river, and no offense to the Spokane River, it is beautiful, it just didn't feel the same as visiting a holy river in Ireland. In Ireland, I really began to understand the concept of thin place and how important place is.”

Learning about Celtic Christianity encouraged Breckenridge to explore putting its elements into practice, both as an individual Christian and as a spiritual leader. Breckenridge said she focused on bringing Celtic reflection into her preaching, designing a liturgy with more emphasis on goodness over original sin, and finding music focusing on creation rather than militarism.

In 2007 she created the Celtic Eucharist, which is an alternative expression of a Holy Communion service with contemporary elements, Breckenridge said.

Breckenridge took the framework for Holy Communion and added elements from different sources. One prayer book she used is “A Holy Island Prayer Book,” written by an Anglican priest who lives on a Celtic site. Breckenridge went on a five day pilgrimage to that location.

“The pattern became that we would have Gospel readings and I would incorporate readings from other books that would teach on a theme,” Breckenridge said. “I would choose a theme, mostly relevant to either personal spirituality or social justice, hear that theme in the Gospel, and then find people writing in the field that would elaborate on that theme.”
The process of creating the Celtic Eucharist met some challenges.

“Not everyone was accepting of it,” Breckenridge said. “Change is difficult for churches. There was some conflict.”

“My interest in it is I have always been someone who struggled some aspects of Christianity, like original sin,” Breckenridge said. “In Celtic Christianity, there is an emphasis on original blessing and appreciating the goodness that is inherent in human nature. There certainly is a doctrine of sin and evil, but there is a beginning premise that we all begin as good.”

This focus on goodness in humanity and creation means the Christian’s role is to discover and preserve goodness, instead of always looking for what is wrong, Breckenridge said.

Celtic Christianity also focuses on God being within and around creation, instead of apart from creation. This idea, called panentheism, believes God’s spirit pervades all of creation.

“I think when you have that kind of understanding, it really makes you appreciate nature and ecology,” Breckenridge said. “I remember always enjoying creation for whatever it was. When I was growing up, no one ever told me that that was a spiritual experience. Spirituality happened in Sundays within the confines of a church building. You would never do something natural like go out into a field and bring flowers from the field into the church. It had to be specially groomed flower arrangements that were ordered from a florist. I think over the years the church lost touch with its earthiness and its sense of creation. Learning about Celtic Spirituality is a breath of fresh air in my life.”

Currently, Breckenridge is leading workshops and working as a substitute Sunday priest.

“I am enjoying an interim period of self-exploration and more time for spiritual practice,” Breckenridge said.

The workshop Breckenridge hosted on July 27 at The Cathedral of St. John the Evangelist ended with a Celtic Eucharist. The service, intended to be a summary of the workshop, began with Breckenridge ringing a bell. She wore a handmade white robe and a stole, which was given to her as a gift. The service was the first time Breckenridge wore it and she invited those present to touch it as a sign of blessing.

Those participating in the Eucharist were given a bulletin with the words of the prayers and hymns. The booklet was divided in sections with the common theme of a circle: “Come to Christ’s Circle, The Circle of the Word, the Circle of Prayer, and the Circle at the Table”.

“A circle is a really important symbol for Celtic Spirituality,” Breckenridge said. “When you look at Celtic art, you will find a lot of circles. The Celtic cross itself is basically a circle that has been folded into a cross.”

Those at the service sat in pews that were setup to mimic a circle so all the participants could see each other and no one was elevated above another.

The information in the bulletin came from a variety of sources. The prayers came from “A Holy Island Prayer Book” by John Philip Newell. The readings came from the Bible as well as books written specifically on Celtic Christianity. The music was not specifically Celtic, but the spirituality of the text is Celtic with their focus on creation, Breckenridge said. The songs were written by her colleague from Tucson.

Partway through the service, Communion was offered followed by a prayer. Then a music meditation occurred, where individuals were encouraged to reflect on a gift they received while listening to piano music. After the meditation, individuals could state the gift for the group. This was followed by the Irish prayer “may the road rise up to meet you.”

The participants valued different parts of the experience. Matthew Baker, whose home church is St. David’s, had been attending the Celtic service and viewed the workshop as another chance to dig into the topic.

“What I enjoy most is the celebration of good and God’s creation, which is permeated by God’s joy,” Baker said.

Martha Lou Wheatley-Billeter is a minister as St. David’s.

The Celtic Eucharist ended with Mother Elaine leading with, “Alleluia. Let us bless the Holy One.”

The last words, spoken by the entire group, rang out in the church, floating up towards the stain-glass windows and magnificent architecture ceiling. “Thanks be to God. Alleluia”

She loves writing for her school's newspaper The Whitworthian in the philosophy and religion beat.