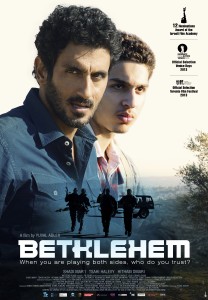 The annual Spokane Jewish Cultural Film Festival, sponsored by Jewish Family Services, kicks off March 27 and will continue through March 30.

Tickets are available at the Magic Lantern Theatre 30 minutes prior to each show, and are also available online. Online purchases will be held at will-call.

General Admission tickets are $10. Tickets for students and seniors are $7.

In this unusual movie which pays overt homage to “The Magnificent Seven,” the noted Israeli actor Uri Gavriel plays Jossef Tawila, a legendary musician whose career ended after a tragic accident. 20 years later, after receiving some sad news, Yosef decides to reunite the remaining members of his band to help a friend—and perhaps to heal his own tortured soul. The plot is a timeless fable, and the film overflows with gorgeous, haunting, original Middle Eastern music played on authentic instruments.

This cutting-edge film tells the story of the complex relationship between an Israeli Secret Service officer and his teenage Palestinian informant. Shuttling back and forth between conflicting points of view, the film is a raw portrayal of characters torn apart by competing loyalties and impossible moral dilemmas, giving an unparalleled glimpse into the dark and fascinating world of human intelligence.