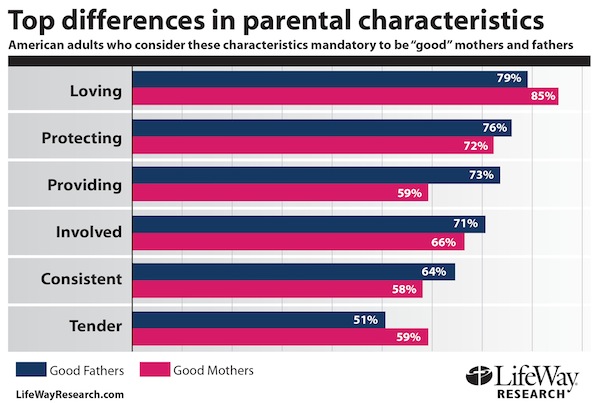 A survey released last week showed most Americans believe good parents should be loving, supportive and protecting, but few see the necessity of parents having a commitment to Christianity or religion.

LifeWay Research conducted the survey in March and found “Loving” is the No. 1 characteristic deemed mandatory for mothers (85 percent) and fathers (79 percent). After “loving,” four of the next five characteristics are shared, including “supporting,” “protecting,” “encouraging,” and “involved.”

According to a press release, mothers (35 percent) and fathers (31 percent) being “Religious” garnered a slightly higher return than being a “Committed Christian” (26 percent for both mothers and fathers) on the survey of mandatory traits.

“Clearly Americans who are not Christians themselves would not be expected to value a Christian commitment among parents today,” Scott McConnell, director of LifeWay Research, said in a press release. “However, 3 out of 4 Americans indicate their religious preference is Christian, Catholic or Protestant. This means only a third of these people appear to value parents modeling a commitment to Jesus Christ to their children.

“Being a good father or mother is subjective. Yet in America today the expectations are both high and consistent,” McConnell said.

The full report is available here.

Readers, do you consider see a commitment to Christianity or religion as a top parental quality?

Previous Steward is protector
Next Stewardship is common courtesy