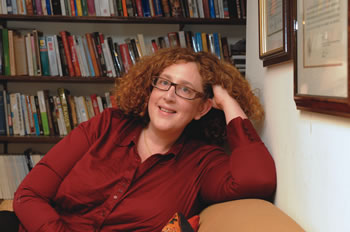 BRIEF: Scholar to lecture on Holocaust, feminine space in Judaism

Lieber will speak on and invite discussion on the topic, “What Does the Holocaust Mean to You?” — starting at 5:30 p.m., April 7 in the Foley Center Library, Teleconference Room. Her keynote lecture, “Reconfiguring Jewish Female Space in Judaism” begins at 7 p.m., April 8 in the Cataldo Hall Globe Room. Both events are free and open to the public.

“Reconfiguring Female Space in Judaism” explores the relationship between gender and spirituality. While the feminist movement long ago challenged traditional ideas about gender in American society, Judaism still wrestles with these ideas today, both in Israel and in the United States, according to Lieber. She will look at examples of contested female spaces — both real and virtual — and explore the way new and evolving ritual practices challenge the conventional boundaries between public and private spheres as women explore their spiritual identities, according to a press release.

She holds the Sophia Ava Asbell Chair of Judaic Studies at Dickinson College. Her work investigates the transformations of Judaism as a living religion and evolving culture from its origins in antiquity through its varied manifestations in the 20th century, including relations with early Christianity. Lieber is especially interested in Jewish mysticism (kabbalah), and women and gender roles in Jewish tradition. She recently published the “Essential Guide to Jewish Prayer and Practices” about Jewish spirituality and traditions.