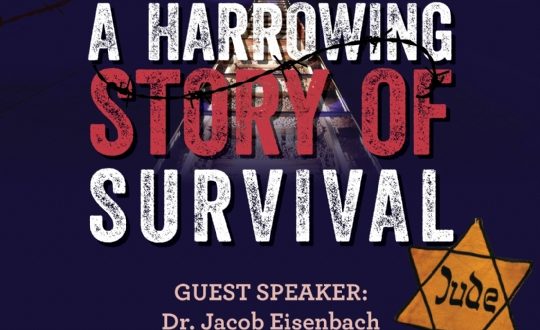 Holocaust survivor to speak in Spokane

The program description says that Eisenbach:

…will be talking about his astonishing life while in the grip of Hitler’s Third Reich for five years, and how hatred, discrimination and intolerance have led directly to the Jewish holocaust. He is the sole survivor of a loving of family of about 100… It has been and continues to be. Eisenbach’s mission to eliminate the scourge of all genocides from the human race.

Eisenbach emigrated from Poland in 1950 with his wife and their first child; he and his family settled in southern California where Eisenbach practiced dentistry until he retired at  92. His life story is the subject of a book, “Where You Go, I Go,” by Karen McCartney.

The event is hosted by Chabad of Spokane County. Tickets are available for $15, plus limited VIP tickets to spend quality time with Dr. Eisenbach are being sold for $500.

Previous In new book, Whitworth journalism professor explores light, sight and the Bible
Next Pope suggests ‘better to be atheist than hypocritical Catholic’