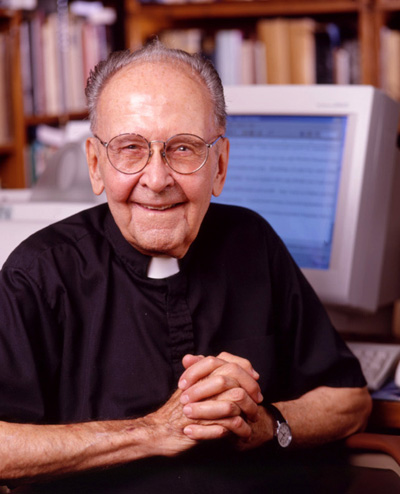 Gonzaga University will host an interdisciplinary conference Feb. 7-8 celebrating the work of Jesuit scholar and teacher Walter J. Ong, considered among the foremost theorists of rhetoric in the 20th century. The conference is titled, “Technology, Rhetoric, and Cultural Change:  Walter J. Ong, S. J. in the Age of Google, Facebook, and Twitter.”

A student of Marshall McLuhan and Perry Miller, Ong’s dissertation on the importance of Peter Ramus, a 16th century logician who developed a deeply influential pedagogy, brought him an international audience. Over the course of his long career, Ong published several books and hundreds of essays, most arguing that the technology of human communication is reflected, however indirectly, in human consciousness, according to a press release.

This conference will celebrate Ong’s legacy and the tradition of Jesuit scholarship. As enthusiasts of new media daily claim its transformative status, the conference will also explore – using the lens of Walter Ong’s scholarship – these powerful new communication tools and the emerging world they promise.

Gonzaga Academic Vice President Patricia O’Connor Killen will offer a welcome at 5 p.m., Feb. 7, followed by a keynote lecture by English Professor Sara van den Berg, of St. Louis University, who will discuss “The State of Ong Scholarship.” Offering the concluding keynote lectures on Feb. 8 at 3:15 p.m. will be Regis University religious studies Professor Randolph Lumpp, who will discuss “Going Global with Walter Ong: The Society and the Site,” followed by a lecture from Gonzaga communication Professor John Caputo will discuss “Walter Ong: How The Seamless Web of Technology is Restructuring Consciousness.” The conference, to be held in the Jepson Center for the School of Business Administration, features scholars from throughout the world who will present lectures on the following themes: Ong and Writing/Literature; Orality; Language Studies; and Ong and Philosophy.