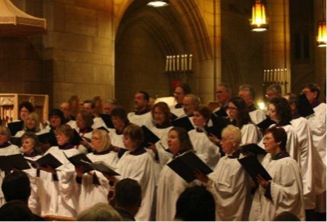 On Feb. 16 at 4 p.m, an interfaith choir from multiple Spokane churches plus local choral groups will join the Cathedral Choir of St. John the Evangelist for a choral celebration of the season of Epiphany.

Following the elements of Evensong, the Anglican service for prayer at the end of the day, the Festival will begin with the premiere of “Paean on Two Hymns for Epiphany for Brass and Organ,” written by James K Holmes, composer, organist and member of the Cathedral Choir. Holmes will also conduct the massed choirs throughout the service, according to a press release.

The Festival, part of the St. John’s Second Sunday concert series, is co-sponsored by the Spokane Chapter of the American Guild of Organists, (AGO).  St John’s organist-choirmaster, Janet Ahrend, and the AGO have been planning this major festival since last summer.  Four AGO organists will participate during the service, as well as Robert Collins, dean of the Spokane AGO Chapter, who will serve as cantor.

According to a press release, the Cathedral Brass, which includes members of the Spokane Symphony, and the Cathedral Bell Ringers will also participate.  The congregation will sing several hymns during the service, as well as join the choir during the major anthem, “O Morning Star, How Fair and Bright,” by Michael Burkhardt.

A $10 donation is requested to help offset the cost of the performance.  For more information, visit the cathedral website or call 838-4277.

Previous POLL: Do you read your horoscope?
Next Being a spoke in Spokane