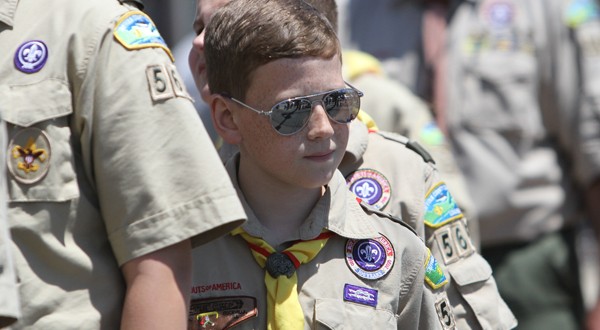 (RNS1-may29) A Boy Scout marches with his troop during the Memorial Day parade in Smithtown, N.Y., May 27. For use with RNS-BOY-SCOUTS, transmitted on May 29, 2013, RNS photo by Gregory A. Shemitz.

The president of the Boy Scouts of America on Thursday (May 21) called for an end to the group’s ban on gay troop leaders.

Robert Gates, a former Secretary of Defense, said in remarks prepared for a meeting of the organization’s leadership that “we cannot ignore the social, political and judicial changes taking place in our country.”

Gates said he was not proposing a formal rule for the group — yet.

“I must speak as plainly and bluntly to you as I spoke to presidents when I was director of the CIA and secretary of defense,” he said. “We must deal with the world as it is, not as we might wish it to be. The status quo in our movement’s membership standards cannot be sustained.”

Part of Gates’ problem is that gay scouts are growing up. Last month, the Greater New York Councils said it was hiring the first openly gay Eagle Scout, Pascal Tessier, 18, to work as a camp leader this summer.

Gates noted in his speech that “we can expect more councils to openly challenge the current policy.” Although the national board has the power to revoke charters, he said such a decision “would deny the lifelong benefits of scouting to hundreds of thousands of boys.”

Gates indicated that churches and other religious groups — which currently sponsor 70 percent of all Scout troops — would be able to “establish leadership standards consistent with their faith. We must, at all costs, preserve the religious freedom of our church partners to do this.”

The status quo, however, is untenable because some religious groups support gays and lesbians, and “we find ourselves with a policy more than a few of our church sponsors reject — thus placing Scouting between a boy and his church.”

Gates’ comments drew praise from Scouts for Equality, a group composed largely of scouting alumni dedicated to ending the ban.

“This is another step forward for the Boy Scouts of America,” Scouts for Equality executive director Zach Wahls said in a statement. “I’m proud to see Dr. Gates charting a course towards full equality in the BSA. While our work won’t be done until we see a full end to their ban on gay adults once and for all, today’s announcement is a significant step in that direction.”

The issue has reached all the way to the U.S. Supreme Court, which ruled 5-4 in 2000 that the Scouts, as a private organization, had the right to set its own membership standards, including excluding gays. Gates’ said the BSA’s legal defense of its policy has “weakened” since that decision and is vulnerable to a court fight.

Two years ago, the BSA repealed its ban on gay scouts but refused to drop the ban on gay adult leaders.

Gates served as secretary of defense from 2006-2011. In 2010, he approved regulations making it more difficult to kick gays out of the military. In May 2014, he began a two-year term as the BSA national president.

Previous Don’t Be Mad At the Mad Men (And Women)
Next The Bible Says: Are Old Testament Laws Still Binding?