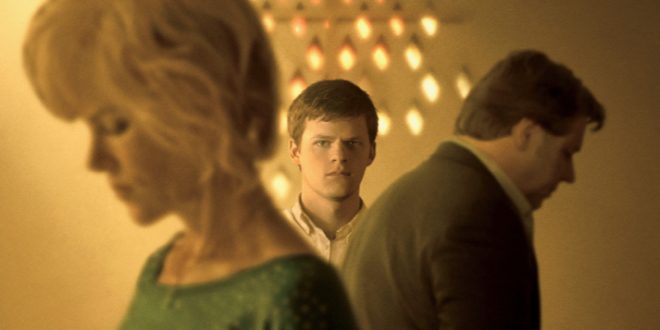 Quick Disclaimer: I do not claim to represent the Church, the LGBTQ+ community, anyone who has been affected by conversion therapy, or any other community this film affects/portrays.

The film begins with Eamons starting his conversion therapy program, Love In Action (L.I.A.) and proceeds to place moments of his time in L.I.A. side by side with significant moments leading to his realization that he is gay and his choice to join the program. Despite having some editing and screenwriting issues that confuse the plot and the timing and ordering of certain events, masterful performances from Edgerton, Hedges, Crowe, Kidman, Troye Sivan, Xavier Dolan, and Britton Sear (really everyone in the film) make the relationships in the film clear and, in some cases, complex.

Admittedly, the adjective “harrowing,” which some reviews of the film already use, accurately suggests the discomfort brought on by many scenes in “Boy Erased.” However, it fails to capture the problematic irony that arises from the distance between the title and what the film actually portrays. Specifically, the film portrays Eamons as one of the more neutral members of L.I.A., not subjected to the cruelty of L.I.A. as much as Cameron (Sear) and Sarah (Jesse LaTourette) nor buying into the program as much as Jon (Dolan). Also, the camera often is angled or turns away in the more chilling moments, perhaps leaving those to the imagination, perhaps not wanting to admit the depths of how traumatic conversion therapy can be.

On the note of relationships, Crowe and Hedges as father/pastor and son offers the most interesting pair in the film, withholding the physical violence one might expect to be associated with love after seeing Cameron’s relationship with his family play out on screen. One of Hedges final lines is something like, “I’m gay and I’m your son. Neither of those are gonna’ change, so if our relationship is gonna hold, you have to be the one to change.” That sums up the complexity of the father-son dynamic and offers the primary question the film asks of the Church, namely: will you change?

Yet the premise of the film makes this question simultaneously rhetorical and narrow-minded. Jared’s family and Church situation is precariously constructed to offer no chance for reconciliation between the Church and Jared and little chance for Jared’s situation to be extended beyond the film, despite credits statements which attempt to universalize his experience. The fact that the only scene of reconciliation between Marshall Eamons (Crowe) and Jared occurs in a Ford dealership instead of a church makes it clear that the Church is not redeemed for the film, just Marshall the individual, the father.

So where do I stand? As a film, “Boy Erased” holds up technically and offers some significant, timely questions the Church needs to reflect on in its relations with the LGBTQ+ community. Yet, it does not acknowledge the work that some churches and religious communities are already doing to bridge the divide and upholds the perception that there is something intrinsically wrong about LGBTQ+ people in God’s eyes. (At the time of the film’s release, 14 states, 1 territory, and 48 counties/municipalities/communities have banned conversion therapy, Washington State included) Ultimately, I think that despite the film’s flawed approach to portraying a widespread issue, its questions of the Church still merit contemplation so that perhaps some reconciliation and reasonable behavior can start to take the place of the fear, anger, and violence shown in “Boy Erased.”

Previous Ask A Buddhist: When Friends Disagree
Next Survivors of California’s unending fires cook up Thanksgiving for latest victims