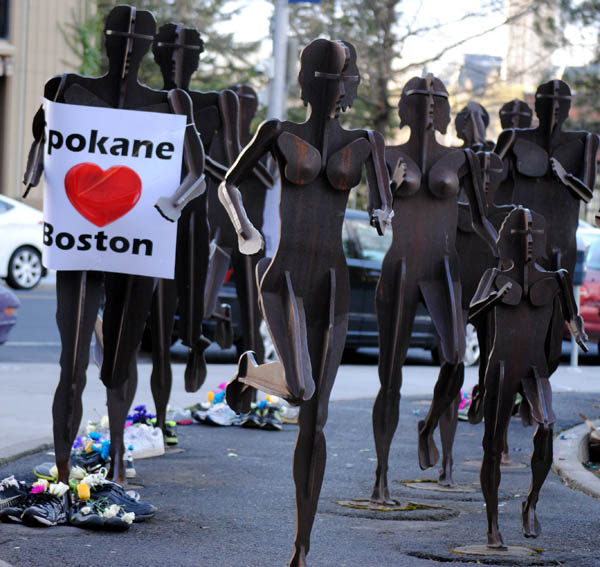 Boston Marathon bombings: One week later, a look back at coverage

Last week the U.S. was rocked by bombs that exploded near the finish line of the Boston Marathon. In the hours and days that followed, news outlets responded as usual: With a flurry of coverage.

But sometimes, it's hard to take it all in. It's hard to think through it all, to even begin to comprehend it. We'll never really understand it — and yet, we try to make sense of it as much as we can.

One week after Boston, here's a look back at what writers from all five faith and values sites around the country have been reflecting on.

How do we respond?

Sam Fletcher sat in a coffee shop in Spokane, Wash., his book unopened, his eyes glued to his computer screen. “So this is what gets our attention,” he wrote. “This is what makes us sit up, take notice and glue our eyes to something. The stupid, angry bros of the world …”

Jodie Dye's sister was running the marathon. When Dye heard about the bombs, her pride for her sister quickly turned to fear, then finally, relief when she learned her sister was OK. She shared a note from her sister: “We will be forever changed by this day but not in the way intended with fear that it was supposed to bring, but with the love of runners for each other, love of the family and friends that support their runners, and the love of Boston for its city and its marathon. We love you Boston!”

Melody Gordon's son lives in Boston, and fear struck when she heard the news of the bombings. “These terrorists want us to be unsettled in our lives and cause significant stress,” she later wrote. “We should respond with a forthright attitude that this will not bow us down.”

The day after the bombing, Rev. Steve Swope in Columbia, Mo. thought back to 9/11 – and on how to respond to tragedies that have become all to familiar. He focused on reconciliation: “We ourselves will be among the wounded if we give in to hatred, to desires for retribution. But if we work for peace and reconciliation instead, we will begin to bring healing into the midst of suffering.” In a letter to his congregation, Pastor Tim Morris urged a “radical” response – but not the kind of radical you might think of. No, his “radical” was a response focused on blessing, doing good and forgiving.

Bill Williams, a Buddhist, also urged for forgiveness and explained a meditation practice that could be helpful.

What can we learn?

Barbara Benjamin searched for the roots of violence, and Kyle Franklin explored a big question: What is terrorism?

For Al Stover, the responders taught a powerful lesson on unity: “We are all one race,” he wrote, “and when we see our brothers and sisters hurting, we do what we can to help them.” Linda Ross also highlighted the helpers.

Yet seeing the pain of our brothers and sisters has become all too common, as Rev. Josh Pawalek in Connecticut observed: “I never imagined I’d be living in a world where I need to know what to say to children in the aftermath of mass violence. We shouldn’t have to know what to say. But we do.”

What do we do?

For Shannon Rae Gentry, the only way to respond in the shock of tragedy is this: “The only thing I can think of is to keep going, be kind to each other and hope the sentiment is returned.”

Some, such as a group of students in North Carolina, responded with vigils. In Spokane, Wash., runners donated shoes to honor the bombing victims.

Reflecting on his own experiences as a frequent runner, Kyle Franklin found a way to see God in the midst of tragedy. He wrote, “Those people — the ones who run into the chaos — are the hands and feet of God.