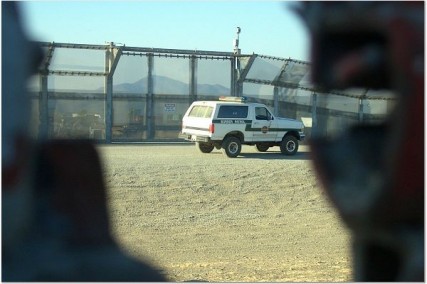 Border lesson: ‘We have failed at Christianity’

On Sunday after running to catch the bus in order to make it to church on time, I hid in the back row, still trying to catch my breath. But when the homily started, what the priest said nearly made me jump out of my seat. He started off by saying that “We have failed at Christianity.” I found my head nodding in agreement to this startling revelation when he noted that when angry mobs confront buses of children from Central America telling them to go back to their home countries as they did in California recently, we’re forgetting about what it means to be Christian.

The priest went on to say that we’re comfortable with Christianity and even with helping others as long as it doesn’t affect us directly. But any time we have to get within the margins — leave our comfortable homes, or do anything more than write a check, we’re unable to act. We fail as Christians. Powerful words that had folks in the pews clapping by the end, but as I sat there I wondered whether or not anyone on Capitol Hill would heed these wise words?

As someone who does advocacy work on behalf of Franciscans who are working with those outside of the margins of society — including undocumented immigrants and unaccompanied minors, I often wonder if anyone in Washington hears us. It’s difficult to measure success in my line of work, and sometimes after the end of a hard day, I wonder if it’s not time to try to find another job. I had these thoughts especially as I watched the news about the busses arriving to jeers in Murrieta, CA.

Have we forgotten about our own shared humanity?

In Washington, one can quickly become cynical, as budgets must be balanced on the backs of those who need help the most, and political games are played to score points, rather than serve the people that officials were elected to serve. But when I saw the scenes from Murrieta, I was shocked and ashamed.

How desperate must a parent be to send their child on a dangerous journey, perhaps to die in the desert, not knowing whether their child will survive? Tens of thousands have done that since the end of last year alone. That’s sheer desperation, and a full-blown humanitarian crisis — not an “illegal” immigration problem.

Collectively as a nation, as Christians, and as human beings, we have failed the least of these. Rather than caring for these children at the border, we don’t know what to do, engulfed by partisan hypocrisy, we are even unable to treat them with basic human dignity. Jesus is at our doorstep, and we have slammed the door in his face. Each of us should be ashamed of our inability to act. Financial cost or political points should no longer matter—but rather as Christians, we should do what the Gospel compels us to do and answer the call by caring for the children who have arrived at our front door.

Instead, we have failed as Christians and as human beings. And each and every one of us would be wise to heed the words of Thomas Merton who experienced a conversion one day on the streets of Louisville:

“In Louisville, at the corner of Fourth and Walnut, in the center of the shopping district, I was suddenly overwhelmed with the realization that I loved all those people, that they were mine and I theirs, that we could not be alien to one another even though we were total strangers. It was like waking from a dream of separateness, of spurious self-isolation in a special world, the world of renunciation and supposed holiness…I have the immense joy of being man, a member of a race in which God himself became incarnate. As if the sorrows and stupidities of the human condition could overwhelm me, now that I realize what we all are. And if only everybody could realize this! But it cannot be explained. There is no way of telling people that they are all walking around shining like the sun.”

I pray that our nation wakes up from our dream of separateness and that we realize our shared humanity and help the least of these — the children at our border, because we are indeed all shining like the sun.

Jason L. Miller, a Toledo native, is the Franciscan Action Network’s Director of Campaigns and Development in Washington, D.C.. Follow him on twitter @419in703

Jason L. Miller, a Toledo native, is the Franciscan Action Network’s Director of Campaigns and Development in Washington, D.C.. Follow him on twitter @419in703