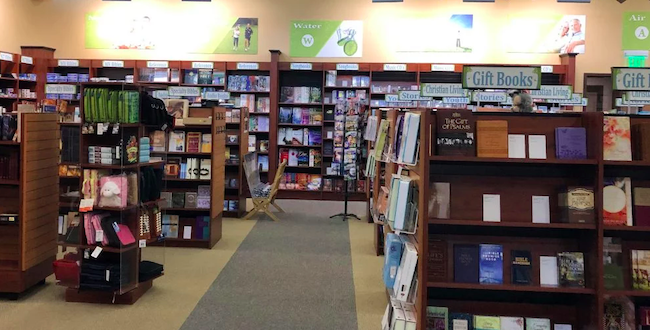 SPOKANE, Wash. (RNS) — A buzzer sounds in Mark Logan’s office every time someone comes through the front doors of Adventist Book Center.

Located about 15 minutes from downtown Spokane, the Seventh-day Adventist bookstore is on the grounds of the Upper Columbia Conference headquarters, which is hidden from the road by towering Ponderosa pines.

“We’re open to anybody, but we’re not obvious from the street,” Logan, manager of ABC Christian Bookstore, said. “But people know we’re here.”

The buzzer trumpets as he speaks. Some customers wander in to peruse Christian gifts while others look through the rows of books. Several head to the grocery section to stock up on vegetarian products.

The Seventh-day Adventist Church, which has about 25 bookstores throughout North America, emphasizes a well-balanced vegetarian diet. Logan said the grocery section is a big draw and helps keep the store open, while many Christian bookstores nationally have recently been forced to close.

“The healthy eating portion of what we do is a niche market. What keeps us remaining viable is that,” he said, noting that many struggling religious bookstores only sell Christian books, DVDs and Bibles.

The store also has a bookmobile that takes books — and food — to towns without an SDA bookstore throughout eastern Washington, northern Idaho and central Oregon.

In March, LifeWay Christian Resources announced it would be closing all 170 of its bookstores. Last year Family Christian Stores closed its 240 brick and mortar stores and in 2012 the United Methodist Church’s Cokesbury stores closed its 57 shops.

A recent study by the Parable Group, a Christian marketing agency, found that there are at least 100 markets with 50,000 people who don’t have access to a Christian bookstore within an hour’s drive.

Logan said LifeWay hinted that it would be closing, but he didn’t expect it to happen so soon.

“We’ve seen this with brick and mortar stores,” he said. “This has been happening for a while, they’ve been struggling, and now it seems like it’s hitting the Christian market.”

Although the Adventist Book Center has a loyal customer base, he said sales have slowed and like all bookstore owners, he’s trying to figure out how to have a better online presence that gives his store an edge over Amazon.

Byron Borger, co-owner of Hearts & Minds bookstore in Dallastown, Pa., said LifeWay and other chain Christian stores stopped “being bookstores,” which was the beginning of the end.

He said that some bookstores had to rely on what he called “Jesus junk” to help keep their doors open.

Some carried a limited number of titles due to theological restrictions. And Christian bookstores face many of the same challenges that other retailers face.

“Mainline liturgical stores, Catholic bookstores and the mom and pop conservative evangelical stores, we’re all in trouble,” he said. “It’s part of a bigger trend in the Western world in a shift away from reading.”

People do read online, he said, but they aren’t reading and buying books.

“It takes a little longer to drive here, talk with me, and then pay more, and people don’t want that. I get it. I understand that efficiency, speed, convenience and cheapness matters,” Borger said.

The bookstore owner would like to see more pastors promote reading Christian books from the pulpit.

Borger, whose bookstore has been praised by authors such as Karen Swallow Prior and John Fea, said pastors should encourage congregants to want to learn more about living a Christian life.

“They need to be driven to look for more resources,” he said. “We need a renewal of a broader vision of faith that drives us to learn more, to study more and read more.”

“Church can no longer simply be an experience to be passively consumed; rather, we are called into the participatory life of a community,” wrote Smith in “Reading for the Common Good.”

“Reading is a vital practice for helping our churches navigate this shift.”

Tish Harrison Warren, Anglican priest and author of “Liturgy of the Ordinary,” admits she doesn’t typically hang out in Christian bookstores. But she’s saddened by the shuttering of any bookstore.

“I think the fewer brick and mortar kinds of bookstores we have in our towns and cities, the fewer books that people are exposed to,” she said.

Harrison Warren lives in Pittsburgh with her family but calls Austin, Texas, her home. There, she often perused Monkeywrench Books, which she described as a “progressive, anarchist bookstore.”

“I’m probably not their target demographic, they would never sell anything I wrote, but I would love to go in it because I’d find all kinds of crazy books I’d never normally buy. I was exposed to ideas that I wouldn’t encounter in the wild otherwise,” she said.

An Amazon algorithm, for example, would never recommend a book for her on the history of people of color in the LGBT movement, she said.

“I probably wouldn’t find that in a Barnes & Noble, it’s so niche, and I wouldn’t find it in a Christian bookstore, but there (Monkeywrench) I could sit with it and buy it and take it home,” she said.

Harrison Warren, who advocates for pluralism, longs for a city full of bookstores that contradict each other ideologically. She doesn’t want just neutral spaces or progressive or conservative ones. Those lead to echo chambers, she said.

Instead, she loves bookstores that offer a clear point of view and serve a distinct audience.

“I just think that’s why we have bookstores — Catholic bookstores and gay bookstores and feminist bookstores — because you can’t fit all those books in a Barnes & Noble. As good as Barnes & Noble is, and I’m glad it exists, I feel like the bigger story here is the loss of culture,” she said. “I think we need those stores, even if I disagree (with all or part of) their particular ideology or perspective. I still want them to exist and have a way to robustly represent the ideas of their community and constituents.”

According to the Association of American Publishers, the sales of Christian and faith-based books are up — particularly books focused on simple living, values and inspiration.

Although he said the closing of so many chain Christian bookstores is sad, particularly because of the loss of jobs, he is hopeful that the trend is an opportunity for change.

“Maybe we can have a better conversation about what kind of stores we really need, what a religious bookstore this day and age ought to look like,” he said. “Maybe we don’t need one-size-fits-all chains all over the place.”

Previous The story of our hands, bodies
Next Ask A Buddhist: Monastic Robes