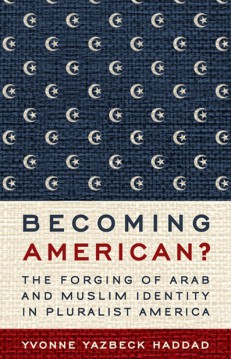 For many Americans, Islam didn't enter the spotlight until after Sept. 11.

However, in Yvonne Yazbeck Haddad's new book “Becoming American? The Forging of Arab and Muslim Identity in Pluralist America,” we are reminded of the overlooked struggles that Muslims have had to overcome to make a home here. Haddad is a distinguished historian and a professor at Georgetown University.

Her writing, though, isn't overly academic. She presents her case clearly and captivatingly. Her argument is this: American Muslims are just as American as anyone else in this country. Many Muslims immigrated here, just like my ancestors emigrated from Ireland years and years ago. And Muslims have a right to be here, just like the rest of us do. But Haddad goes beyond simply sharing her opinion with us. Her book is filled with facts about Islam in America. For instance, she reports that about 80 percent of American Muslims are unmosqued.

And she presents us with a timeline where she explains, for instance, that in the 1980s Muslim Americans stopped questioning whether they could live in the U.S. or not, and began redefining what Muslim life in America actually meant. Since then new organizations came into existence, like the North American Association of Muslim Professionals and Scholars (in 1993).

The author also gives us an important reminder that Sept. 11 hasn't been the only time Muslims have had to fight to show to their loyalty to the U.S. The Arab-Israeli conflict, the Salman Rushdie Affair and the Iranian Revolution were also instances that forced American Muslims to prove themselves.

“The goal of these reflections is not only to prove that Muslims living in the West are loyal citizens, but more importantly, that they share American values and are not associated with the teachings of those targeted in America's declared war on terrorism, who have been variously labeled as extremist, fundamentalist, jihadist, terrorist, and proponents of an Islamo-fascist Islam,” Haddad writes.

It hasn't just been everyday citizens that have given American Muslims a hard time. Haddad points out that the government hasn't exactly been a cheerleader for Islam. The Bush Administration, she notes, once announced its intention to celebrate Eid-ul Adha with the Muslim community. Then the event was postponed. Then canceled. A statement was never made. Other acts by the administration made the country seem anti-Muslim, not anti-terrorism, Haddad writes.

Over the decades we have made progress, but in Haddad's honesty she says that we still have a long way to go. Anyone interested in helping pave the way to a more understanding, intelligent, pluralistic and accepting nation can start by reading this book.