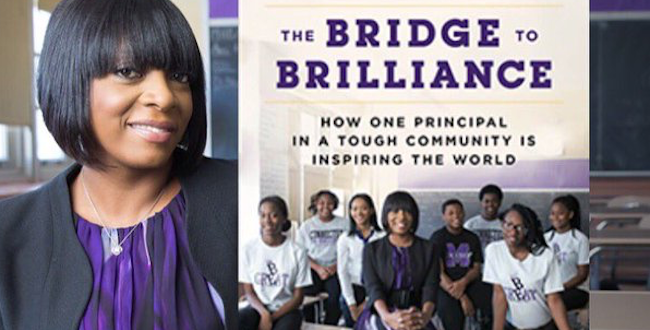 The Bridge to Brilliance: How One Principal in a tough Community Is Inspiring the World By Nadia Lopez with Rebecca Paley 266 pp., $26.00 Viking, 2016

Her new book, “The Bridge to Brilliance,” chronicles the challenges and frustrations of winning the support of students, parents and educators in a new public school, which added grades seven and eight in the second and third years.

The book’s title comes from a walk across the Brooklyn Bridge, an eye-opening, thrilling experience for students who had never left their neighborhood just blocks away.

Readers will marvel at the persistence of Lopez, the school’s founder and principal. From the start disruptive students fought and screamed, and ran down the halls. “It was crazy,” she writes. “It felt like an asylum rather than a school.” Ninety-eight percent of the students were black and Latino.

Lopez established two important principles that helped win the trust of students. First, she maintained an open door policy so that any student could drop by her office any time of day. She was available seven days a week, often until 10 in the evening.

The second principle, which she hammers home, involves the practice of deep listening – getting students to talk about their obstacles, feelings and home life. One student who was filled with anger had just witnessed his father being shot and wounded. There were 72 shootings in the neighborhood in a single year.

Lopez, who is black, stopped calling her charges “students” and instead called them “scholars” to emphasize the value of learning and the possibility of breaking out of a cycle of poverty, crime and prison.

She is frank about the physical and psychic toll of her dedication. She reached her “breaking point” from total exhaustion and considered quitting.

A turning point came when Brandon Stanton, the producer of the blog “Humans of New York” asked one of her students to name the person who had the biggest influence on him. The boy responded “My principal, Ms. Lopez.”

When Stanton later asked Lopez what she would like to do for her scholars, she said her dream was to take them for a tour of Harvard University. Harvard officials embraced the idea and planned a day of activities, including an address by the university president, Drew Gilpin Faust. “The excitement lasted long after our trip ended,” Lopez says.

With Stanton’s help, she launched a crowd-funding appeal with a goal of raising $100,000 to support trips and other activities for her scholars. In just two weeks the appeal brought in more than $1.4 million from 51,000 donors.

Lopez stresses there is no magic formula for middle school success. To challenge students, she had her sixth graders read “The Immortal Life of Henrietta Lacks,” the true story of a deceased African-American woman whose cells were harvested for medical research without the family’s knowledge. Lopez bought copies of the book for each of the students, who broke into groups to analyze the text.

At times, Lopez comes across as overly boastful about her accomplishments. That said, she obviously has had a huge impact on her young scholars. Although the book is repetitious, it contains much wisdom about the crucial roles of educators and parents.

Those who graduate from Mott Hill Bridges Academy often stop by to update Lopez about their progress in high school and beyond.

The real test will come when the Mott Hill scholars have graduated from high school. How many will attend college and how will their educational and career achievements compare with those of graduates from other middle schools? That might be worth a follow-up book.