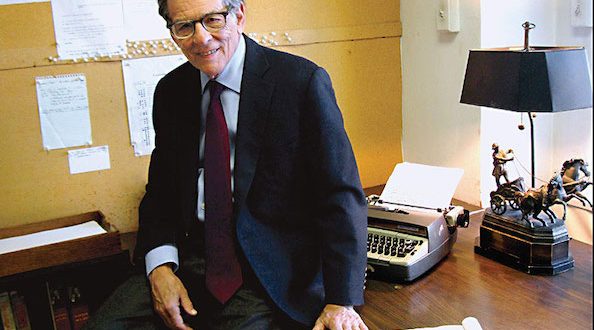 Book Review: Writer gives insights into his craft, but not much into his spiritual life

Author Robert A. Caro has won numerous awards for his biographies of developer Robert Moses and President Lyndon Johnson. He writes about his own work in his newest book, “Working: Researching, Interviewing, Writing.”

Moses demolished New York City neighborhoods to make way for expressways through and around the city. After writing a masterful account of Moses’ rise to power, [“The Power Broker: Robert Moses and the Fall of New York”] Caro turned his attention to “The Years of Lyndon Johnson,” a massive four-volume biography. Caro is working on volume five, but he does not know when he will finish it.

Meanwhile, Caro has published this short memoir, which includes previously published material as well as new writing. He plans to eventually write a longer memoir. Readers’ skepticism can be excused, knowing that Caro is 83 years old.

When Caro began his research into Moses’ career and influence, he had assumed that real political power abided in elected officials, such as mayors and governors. But Moses never held elective office. Instead he wielded immense power through positions on various boards and commissions.

Caro dug into thousands of documents and interviewed hundreds of people who were forced from their dwellings to make way for the construction of more than 600 miles of expressways.

Reporters, writers and journalists would do well to read the details of Caro’s dedication to unveiling the impact of government decisions on average people.

A master word craftsman, Caro takes several years to complete each book. The Moses book finally was published in 1974 at more than 1,200 pages.

The Lyndon Johnson biography showcased Caro’s deep digging and relentless interviewing of average people who lived in the Texas Hill Country where Johnson grew up. Caro was so determined to understand Lyndon Johnson’s cultural background that he and his wife rented a house in the remote Texas countryside and spent most of the next three years there, away from their home in New York City.

Over time Caro learned much about Johnson, including a long-term romantic affair, as well as proof that Johnson stole his election to the U.S. Senate in 1948. Caro tracked down a man who admitted he had destroyed enough ballots to ensure a Johnson victory.

Caro praises Johnson’s many legislative victories. Congress had been stalled for decades during which lawmakers could claim few accomplishments. But when Johnson became president, he leaned on Congress to pass the Civil Rights Act, the Voting Rights Act, Medicare, Medicaid, Head Start, and legislation on immigration and education.

Johnson’s biggest failure as president, according to Caro, was his escalation of the Vietnam War. When Johnson became president, 23,000 American troops were in Vietnam. That number would climb to 586,000 by the end of his presidency. Some 58,000 Americans died and 288,000 were wounded in the war.

Caro may include greater coverage of Johnson’s Vietnam record in the final volume of this opus. Many people believe that if it were not for his escalation of the Vietnam War, Johnson would be regarded as one of the greatest U.S. presidents.

Caro describes Johnson as a complicated man. During 20 years in the U.S. House and Senate, he voted against every civil rights bill, including anti-lynching legislation. But after President Kennedy was assassinated, Johnson became a leading proponent of liberal legislation.

While Caro is a craftsman of insight and details involving family and culture, there is a noteworthy hole in this memoir. We learn little about his spiritual beliefs and practices, or those of the people he writes about.

Previous PODCAST: A Spokane Christian Book Store Is Hanging On
Next What Ramadan means to Muslims: 4 essential reads