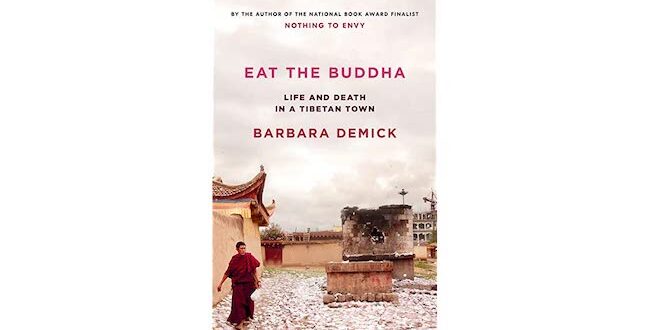 "Eat the Buddha: Life and Death in a Tibetan Town" By Barbara Demick

Eat the Buddha: Life and Death in a Tibetan Town

People were shocked when they learned that a Buddhist monk in Tibet had set himself on fire and burned to death to protest the Chinese invasion of Tibet.

This well-written book, “Eat the Buddha: Life and Death in a Tibetan Town,” describes the attempt to turn Buddhist Tibet into a province of China. The effort failed and led to the death of thousands of Tibetans who refused to give up their peaceful traditions.

One of the survivors was the 14th Dalai Lama, who fled to India and gradually became a world symbol of compassion and peace.

The Dalai Lama was awarded the prestigious Nobel Peace Prize in 1989 for his devotion to non-violence.

Over the course of centuries, hundreds of monks took their own lives, sometimes by drinking gasoline. One monk left a recording, “I am giving away my body as an offering of light to chase away the darkness to free all beings from suffering.”

“Eat the Buddha” is part history and part of a worthwhile narrative that sheds light on the meaning of Buddhism, which draws a large following in Western nations.

The Tibetans are not some isolated, exotic tribe trying to preserve an ancient civilization, author says.

Demick spent time in Tibet, learning about the oppression of Buddhists over the course of centuries. Chinese soldiers destroyed monasteries and punished anyone who carried a picture of the Dalia Lama or otherwise honored the revered monk.

The Dalai Lama realized he was in danger of losing his status as a Tibetan leader, chosen through reincarnation.

China wanted to be recognized as an important world leader. It sponsored the 2008 Summer Olympics and engaged in a massive building program, including construction of new airports and railroads. The Tibetans also want infrastructure, technology and higher education, but they also want to keep their language, culture and freedom of religion.

This book is valuable for shining light on the top of a mountain that is home to one of the world’s most secretive societies.