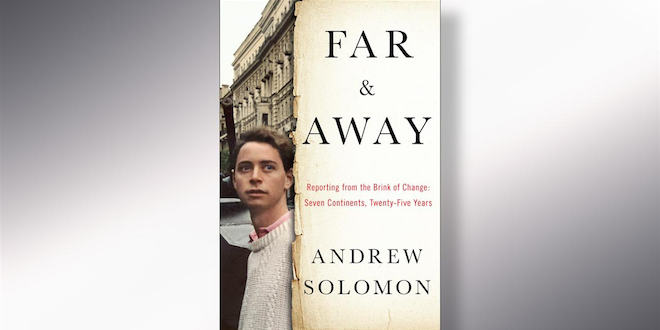 Book Review: A cultural and political tour of nations with Andrew Solomon

We read Andrew Solomon not just for his scrupulous research on a range of subjects, but also for the pleasure of his gorgeous prose.

His acclaimed 2001 book “The Noonday Demon: An Atlas of Depression” investigated that awful malady, including his own long battle with depression. He then delivered another gem in 2012, “Far from the Tree: Parents, Children and the Search of Identity” about families who confront a range of issues such as Down syndrome and schizophrenia.

Now Solomon takes readers on a guided cultural and political tour of a score of nations. The essays in “Far & Away” were previously published in The New York Times and other publications. Solomon has updated each one in this new book.

In a compelling 44-page introduction the author celebrates the wisdom and necessity of travel for adults and children. He has visited 83 of the world’s 196 countries.

Travel, Solomon says, allows us to understand why the rest of the world both loves and hates us. “I remain an American patriot when I am abroad, but I also see my country’s failure of dignity, empathy and wisdom.”

Solomon began traveling out of curiosity, but he came to believe that “encouraging a nation’s citizenry to travel may be as important as encouraging school attendance, environmental conservation or national thrift.”

He skewers Donald Trump for proposing a ban on Muslim immigration and advocating that American Muslims be required to carry special identification cards.

“This cruel demagoguery is contrary to our interests. Walling ourselves off from everyone else renders us odious to those who are excluded, providing incentive for them to become radicalized. … The central proposition of this book is that circling the wagons is not only impossible in a globalized world, but finally perilous.”

The book includes chapters on Russia, China, Turkey, Cambodia, Mongolia, Greenland, Afghanistan, Japan, Brazil, Australia and other countries. Readers might start by picking a country they are curious about. The chapters brim with first-hand reporting about art, music, health and cultural traditions.

Solomon even includes an updated chapter from “The Noonday Demon” about Greenland, where 80 percent of people suffer from depression linked to a cultural taboo against talking about one’s feelings. Suicide there is the leading cause of death.

Solomon recalls his own struggle with depression in a chapter he wrote for Esquire magazine about a visit to Senegal.

“I lived with blinding depression and had long stretches when everything seemed hopeless and pointless, when returning calls from friends seemed like more than I could do, when getting up and going out into the world seemed painful, when I was completely crippled by anxiety.”

While in Senegal, Solomon took part in a ritual in which natives smeared ram’s blood over his naked body as treatment for depression. He found the experience to be “exhilarating.” He cautions against assuming that modern medicine is always right and that ancient ritual is mere superstition.

The author, who is gay, often travels with his husband and their children to faraway lands, where he has developed countless friendships. He frequently invites guests from abroad to stay with his family in New York.

Solomon fans can look forward to his planned next book, featuring profiles of people worldwide.

Previous Meet our summer journalism intern
Next Why are fewer people getting married?