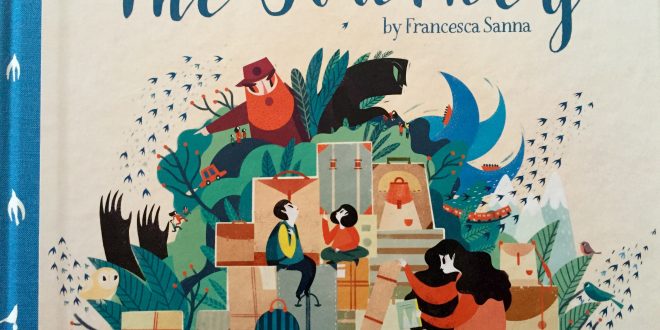 Book Recommendations For Discussing Immigration and Refugees With Children

There are big discussions about immigration and refugees happening across the U.S. and around the world. People are taking to social media, blogs, columns, talking face-to-face, and joining protests to be active in the discussion and resistance. But how do we discuss such difficult and often delicate subjects with our children? Where do we begin? The library or bookstores are great places to start.

I find I often don’t have the words to explain this to our kids. Yes, many of us have our own immigrant stories which we can share, but our experiences and often our knowledge of the situations that force others to flee is limited.  Luckily, others have already put the refugee experience in words and art.

Children’s books can make the history and specific situations surrounding immigration and specifically refugees much easier to explain to children in a way they can appreciate and understand.  There are books on the topic for the very youngest children through Young Adult (YA) literature.

Here are some suggestions grouped by age range.  The ages are merely suggestions. Many of these books, particularly the picture books, can be appreciated by a much wider range of ages.

“The Journey“ by Francesca Sanna 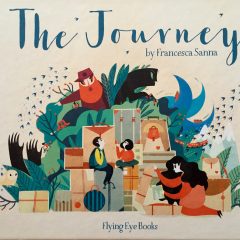 This comes highly recommended by a friend of mine who’s a children’s librarian. I’ve had the opportunity to see quite a bit of the art and it’s gorgeous. The author has combined many different stories of immigrants into one tale of a family’s journey towards safety after a war destroys all they’ve known. The story combined with the colors and scale in the art illustrate the refugees’ view and experience during their journey.  I haven’t read all of this book, but after researching it, I found it so compelling I ordered a copy.  As one reviewer exclaimed, “What a beautiful, heartbreaking, hopeful, necessary book!”

“How I Learned Geography” by Uri Shulevitz 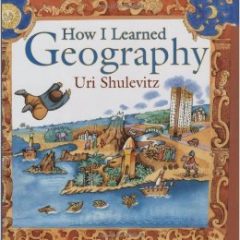 Uri Shulevitz spent much of his life immigrating to new lands–first from Poland to the Soviet Union, then to Paris, later to Israel, and finally to the United States. This focuses on the time, when he was kindergarten-age in Turkestan. The picture book begins with war and devastation which forces them to new lonely unfamiliar lands where food is scarce, but it focuses on the hope the boy feels when he studies a map his father has brought home (to a hungry family who really wanted bread).  Some adults report they find the story dull, but that the children in their lives love it.

“Emma’s Poem” by Linda Glasser Illustrated by Claire A. Nivola 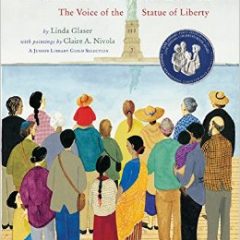 This is the story of Emma Lazarus, her work with immigrants, and how she changed the very nature of the Statue of Liberty. Emma was a wealthy American who “had plenty of everything” and grew up and lived among people for whom that was also true.  She meets immigrants who are very much like her, but are hungry and lonely after leaving behind danger in Eastern Europe. Defying the ideas and norms at the time, Emma Lazarus works to help the immigrants. The book shows the stark contrasts between the existences of Emma’s friends and family and the immigrants she helps.

I’ve read this book with my two youngest children and I highly recommend it.

The book’s dedication reads, “To the immigrants then and now.”

PJ Library provides a reading guide you can download which provides additional Jewish context to the story (Emma Lazarus was Jewish) as well as some suggestions for using the book at home.

“One Green Apple” by Eve Bunting Illustrated by Ted Lewin 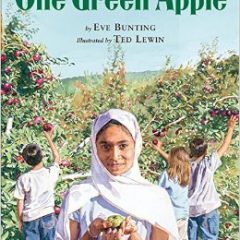 Farah is a recent Muslim immigrant who finds America new and unfamiliar. On her second day of school, her class goes on a trip to the orchard.  There, even though they don’t speak the language and have cultural differences, she starts to feel more comfortable. Though the story is short and simple, it shows how friendship can make a difference, especially for those new to the country. 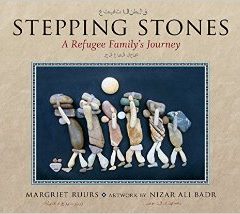 Nizar Ali Badr’s stone art depicting Syrian migration inspired Ruurs, a Canadian children’s author to set text to the art.  The book tells the story of Rama and her family when war drives them from their village.  Their story is shown told through Badr’s stone art. Though it’s a picture book, this book has received strong reactions from adults, who seem to appreciate the story of how the book came to be nearly as much as the book.

“My Two Blankets” By Irena Kobald Illustrated by Freya Blackwood 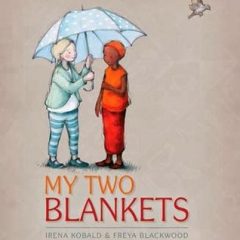 This is the story of what a difference friendship can make, especially for an immigrant in a strange land. Cartwheel is a Sudanese girl who flees the war and winds up in Australia. She finds it strange and overwhelming, so she hides out from it all under an old blanket she brought with her.  Through the help of a new friend, she learns the language and builds a new type of blanket. In this strange land, she didn’t feel like herself anymore, but with the other girls’ help, Cartwheel feels more comfortable and sure that, “I will always be me.”

“Coming to America: A Muslim Family’s Story” By Bernard Wolf 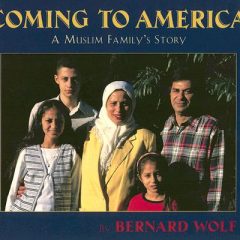 “Ships In The Field” By Susanne Gervay Illustrated by Anna Pignataro

Both the author and illustrator identify with immigrants to Australia. Susanne Gervay’s parents were post-war Hungarian refugees. Anna Pignataro’s parents fled post-war Italy. The author draws on bits of personal experience and family stories to tell a tale of a little girl who flees war with her parents and winds up in a strange land. The publisher’s description says, “It crosses boundaries in a universal recognition that children are part of the journey of war, migration, loss and healing. Through warmth, humour, pathos and story within story, it breaks the silence, engaging children, families and community.”

From the American Girl Doll collection, both Kirsten and Rebecca’s stories involve immigration.

“Meet Kirsten” by Janet Shaw shares the story of Kirsten Lawson’s immigration from Sweden in 1854.  Her story tells of their time aboard the ship and the excitement and hardships of getting to and settling in Minnesota.

In “Meet Rebecca” by Jacqueline Dembar Greene, Rebecca Rubin is the daughter of Russian Jewish immigrants in New York in 1914. There is much focus on the perils in Russian and the need to get her uncle and ill cousin Ana out of Russian to safety in America.

“Rebecca and Ana” is the next in the series. It deals with Ana and her family’s arrival at Ellis Island and adjustment in America.  The historical information at the end of the book discusses the education, living conditions, and jobs prospects for immigrants during the time.

“Bridge to America” By Linda Glaser 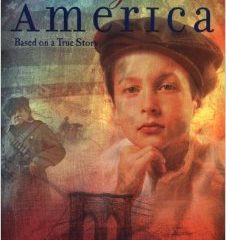 The story of 9-year-old Fivel is loosely based on the true story of the immigration of Phil Myzel from Poland to America in the early 1900s. It tells the story of a Jewish immigrant boy who leaves behind the horror of one land for the unknown in another.  PJ Library offers additional information and discussion topics for the book on their website.

“The Arrival” by Shaun Tan 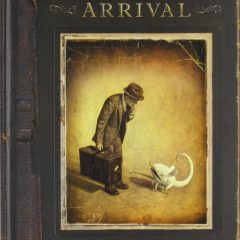 This is another book we don’t have personal experience with, but the description is absolutely fascinating. Kirkus Review describes it as, “An astonishing wordless graphic novel blends historical imagery with science-fiction elements to depict—brilliantly—the journey of an immigrant man from his terror-beset land of origin to a new, more peaceful home. Sepia-toned panels and turn-of-the-last-century dress and architecture seem to place readers in familiar territory—but fantastical images, including monumental cities, various bizarre forms of air transport and distinctly alien animals serve to unsettle both protagonist and readers, plunging the latter into the unsettling and often terrifying experience of being alone in a new land… ” 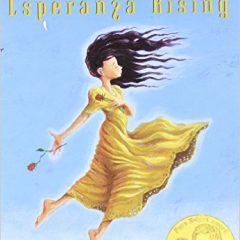 I recommend this one as an audiobook. The audiobook is well done and hearing the Spanish in the story is less halting  (and more accurate) than reading it. My kids and I listened to it on audiobook on a trip and it we all loved it.

This story tells of Esperanza’s immigration to the United States from Mexico during the Great Depression. It illustrates how different life is in America for immigrants. In Mexico, Esperanza is well-educated and privileged. She has fancy dresses, a comfortable home, new expensive dolls, and huge birthday parties every year. In the United States, she’s treated poorly, is forced to live in an overcrowded shack, must work very hard for very little, and fears deportation.

“The King of Mulberry Street” By Donna Jo Napoli 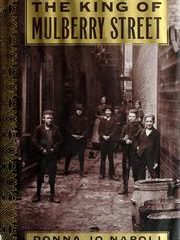 Nine-year-old Benjamino is an Italian Jewish boy whose mother sends him to Ellis Island alone. The book tells of his time on the streets in New York and his desire to return to his mother and Italy. It’s described as “Gripping, realistic, and gritty.”

“My Childhood Under Fire: A Sarajevo Diary” By Nadja Halilbegovich 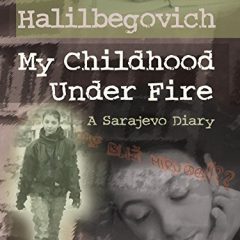 This biographical account is the diary of 12-year-old Nadja during the Bosnian war.   This captures the horrors of war before she immigrates to the United States.  Better suited for older children, this can help explain why refugees are forced to flee and why, for many, they can’t simply, “Go home.”

“Kids Like Me: Voice of the Immigrant Experience” By Judish M. Blohm 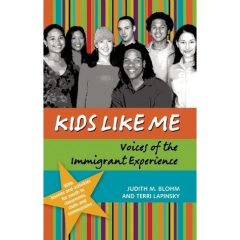 Twenty six personal narratives from 23 different cultures. Most of those featured range from ages 10-21. They come from places like Afghanistan, Sierra Leone, Kosovo, Iran, China, Mexico, and South Korea (among others). The author’s goal in compiling the stories is to help American learn more about immigrant classmates and the world beyond American shores. The stories are the first part of the book. The second part contains related learning activities that can be done alone or in a group. 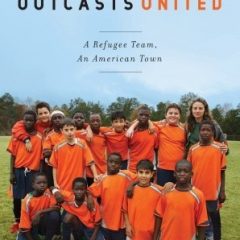 When Clarkston, Georgia is one of several cities designated a refugee settlement center in the 1990s, Luma Mufleh, a Jordanian immigrant formed an unlikely soccer team of refugees from war zones all over the world. There are those in the community that welcome them and those who fear them. This non-fictional account focuses on the families, backstories, and experiences of each of the characters as well as how the town accepts the refugees (or doesn’t).

Though it’s not a book, the website for The Documentary Project for Refugee Youth can be a great resource.  The website documents the work of a group of refugee teens who attended a weekly multimedia workshop. They taught about their experience through art. The website features a scrapbook, photo essays, interviews, and a free curriculum available to download. You can browse through sections on topics like activism and art, war testimonies, and you can also find a list of resources.

Note: Many of the picture books  are available for free on YouTube.

Special thanks to wonder librarian (Ms) Kim Zahller of the Oklahoma Pioneer Library system for her contributions to this list.