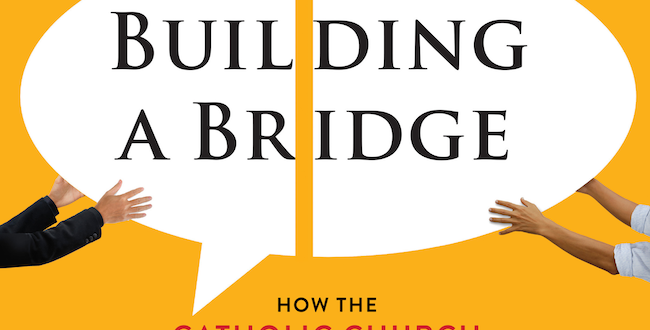 Building a Bridge: How the Catholic Church and the LGBT Community Can Enter Into a Relationship of Respect, Compassion, and Sensitivity By James Martin, SJ 150 pp., $19.99 HarperOne, 2017

James Martin is a popular Jesuit priest who has many friends in the LGBT [lesbian, gay, bisexual and transgender] community.

Martin grieved last year when a gunman fatally shot 49 people in an Orlando, Florida., nightclub popular with gays. He grieved, too, at the mute reaction of many bishops, showing that LGBT men and women are “still invisible in many quarters of the church.”

In this short book Martin urges Catholic leaders to treat the LGBT community with “respect, compassion and sensitivity.” Likewise, he encourages gays to treat the church the same way.

“Hundreds, perhaps thousands” of gay clergy and gay and lesbian members of religious orders “live out their promises of celibacy and vows of chastity,” Martin writes.

Gay and lesbian church employees, he says, suffer a special condemnation not directed at others who violate traditional church teachings.

“Do we fire a straight man or woman who gets divorced and then remarries without an annulment? … Do we fire women who bear children out of wedlock? How about those living together without being married? Do we give pink slips to those who practice birth control? Those actions are against church teaching, too.”

Martin has counseled LGBT men and women and has “heard many depressing stories of stray comments made by priests in homilies or in private conversations that betray the most hateful attitudes toward LGBT people.”

The author could have made a stronger case if he had included a few examples to illustrate his main points. He vaguely cites the “gifts and talents, the joy and enthusiasm brought by LGBT Catholics. Especially among younger LGBT people, I find a tremendous zest for the faith. 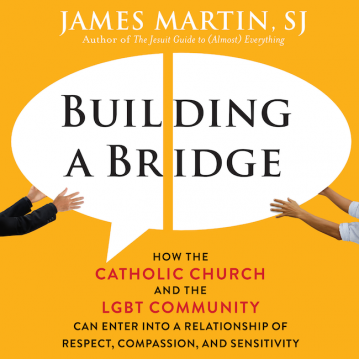 The book has touched off intense debate among Catholics. The seminary at the Catholic University of America withdrew a speaking invitation to Martin. Rightwing web sites have castigated Martin, who is a popular speaker and an editor at America, the Jesuit magazine.

Gay men and women understand the value of compassion, having suffered “misunderstanding, prejudice, hatred, persecution and even violence.”

In a chapter titled “Jesus Meets People Where They Are,” Martin notes that Jesus welcomed tax collectors and others without judgment or condemnation.

Martin encourages clergy members to show compassion by listening to their LGBT brothers and sisters and asking them questions such as, “What was it like growing up as a gay boy, a lesbian girl or a transgender person? What is your life like now? How have you suffered as a result of your orientation?”

Readers may finish this book believing – or hoping — that “Building a Bridge” between the Catholic Church and the LGBT community is an achievable goal.

Tags and Sensitivity book review Building a Bridge: How the Catholic Church and the LGBT Community Can Enter Into a Relationship of Respect compassion james martin lgbt and catholic

Previous Beef stew and white supremacy: The weird demimonde of #TradWife
Next Praying for Las Vegas and gun control