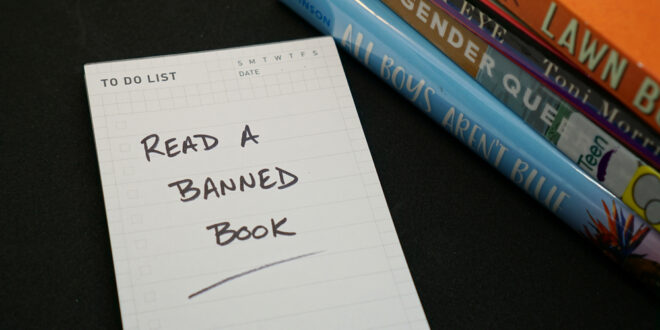 To do list reminder to read a banned book, along with a pile of books frequently on censorship lists / Photo by mariar12 (Depositphotos)

What book gives us the earliest description of someone relieving himself? (And not even using a flush toilet!)

What book gives us beautiful descriptions of same-sex love and of both the male and female body?

What book may often make its readers feel uncomfortable? (“Love your enemy as yourself”? Give me a break!)

You know the answer to all these questions: the Bible.

Clearly the Bible needs to removed from our schools and libraries lest it corrupt our youth or make them feel guilty or cause them to question traditional American capitalism, individualism and nuclear family values.

And of course this is just the beginning of a necessary purge. We need to remove all encyclopedias and histories that give us the low down on the human experience, all art books that depict the human figure and computers that give access to all of the above.

And how about all that decadent literature? I’ve heard that even Nobel Prize winners mention sex.

And then there are those children classics like “Lassie” and “Black Beauty” that promote unnaturally close relationships between humans and furry creatures.

And of course we need to ban scientific literature, newspapers and journals that raise the specter of global warming. Talk about uncomfortable!

The above was fun to write. I wish it was only satire.

Many conservative state legislators throughout the country (including Idaho) don’t want students to be taught or libraries to have available material that makes the young feel uncomfortable or that challenges the views of their parents. Professional educators, on the other hand, argue that we grow by getting out of our comfort zone, having our views challenged.

I’ve only had the privilege to teach a few of the books currently on the must-be-banned list: Toni Morrison’s “The Bluest Eye” (1970), a searing indictment of the systemic racism that causes a young black girl to desire blue eyes; Morrison’s “Beloved” (1987), her indictment of slavery; and Art Spiegelman’s “Maus” (1980), which draws on the brilliant tradition of the Jewish graphic novel to depict the horrors of the Holocaust. All of these works are challenging contemporary classics that need to be taught to grasp our past and present.

I also regularly taught perhaps the most often banned work of American literature: Mark Twain’s “The Adventures of Huckleberry Finn.” First banned because it made fun of Sunday school and because of its slangy language, it became a contested text in the 20th and 21st centuries because of its frequent use of the “N” word. This is indeed difficult to swallow — but, of course, historically accurate.

Conservative critics might decry the call to remove a classic like “Huck Finn” from the school curriculum as an example of “cancel culture,” but they themselves want to cancel culture, especially that of those who may feel like misfits in our normative culture.

“The Absolutely True Story of a Part-Time Indian” (2007) by Spokane and Coeur d’Alene tribal member Sherman Alexie is a contemporary example of a book often banned for its inappropriate language. It appeals to young adults who might use such language themselves and like the “Part-Time Indian,” may have a difficult time fitting into their school environment.

Many of the books social conservatives want to keep out of the hands of young adults concern gender identity and confirm the view of those in the LGBT community and of medical experts that gender is fluid, not fixed. Fluidity of all kinds is scary to those longing for the good old days when everything was fixed. (And when exactly was that?)

We hear most about attacks on books like those mentioned above or books that present an honest history of America. But in Florida, and probably elsewhere, math textbooks that include “social and emotional” learning material have come under attack!

Such skills are useful in solving problems in math and in life, but teaching them is doubtless considered creeping Socialism.

Legislators who want to remove books from schools and libraries often say they are defending parents’ rights. Of course parents should be concerned about what their children read, but surely parents of marginalized children have rights and concerns, too. They might want to have their children read books which affirm their experience. And parents may want their children to learn about the actual history of their country.

Some parents may even want their children to read that shocking book, the Bible.

Previous Greater Gonzaga Guild welcomes Clarice Wilsey on Sept. 30 speaking on The Holocaust
Next University of Idaho Memo is Right, and Wrong, on Freedom of Speech