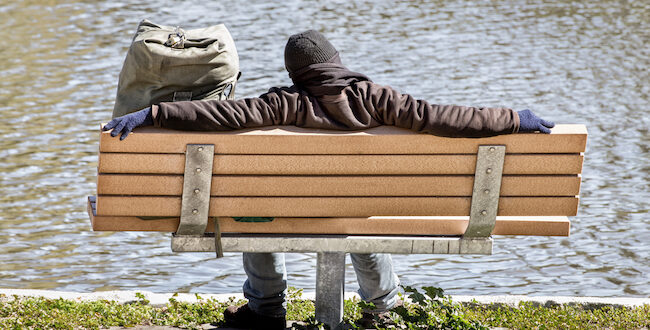 A homeless person on the beach/DepositPhoto

About six years ago, when I was first escaping homelessness, someone suggested I should wait five years before writing anything about homelessness.

While that may seem wild, if not audacious, they did have a point. Six years ex post facto, I find myself remembering all kinds of things about the homeless period of my life. They are not necessarily bad things, either. They don’t necessarily relate to PTSD, for example. They are merely interesting things.

Like this guy they called Blue Boy. A Black guy from Arkansas who always wore blue. His problem unfortunately was that he was an alcoholic. Like many on the streets, he was prone to stealing things in order to feed his alcoholic habit. But he was basically a good guy, he really was. He was just desperate.

One day I had just acquired a laptop. I was setting it up in the local McDonald’s, and becoming fairly frustrated. I told Blue Boy, “I am so frustrated over this damn thing. Do you have a joint by any chance?”

“Cool,” I said. “I’m gonna go out and smoke this thing. Watch my laptop while I’m outside.”

So, having trusted Blue Boy — who was basically a good guy, whom I liked — I stepped out onto Shattuck Avenue, smoked a joint in broad daylight (along with all the rest of the people in Berkeley smoking joints in broad daylight. ) Then I walked back into MickeyD’s.

“Hold it for me? Whaddya mean? Why don’t you just give it back to me?”

Well – you see where this is headed. Long story short, I found myself beating the palms of my hands on the sidewalk as Blue Boy and his partner Joe walked off with my laptop.

Blue Boy looked at me as though saddened. I’ll never forget what he said:

For Blue Boy very much enjoyed my piano playing at the North Berkeley Senior Center. He would steal my laptop, but he didn’t want to wreck my hands in the process.

At about that time, I logically decided it was about time to check into the local psych ward. Six days later, I came back. First I saw Joe, who said, “Hey Blue Boy’s been trying to get your laptop back to you. We both just figured you were in no condition to take proper care of the thing, and we wanted to hold onto it until you got out of Herrick.” (Herrick being the name of the local psych ward.)

I was like, “Yeah right buddy. Where is he?”

“You!” I shouted, glaring at Blue Boy.

“I wanted to get your laptop back to you — I was looking all over for you, then I figured you were at Herrick. Finally just like literally five minutes ago, I sold it for booze … “

“So what are you gonna do about it?”

“Here’s what I’m gonna do,” I said, then paused, collecting myself. “We’re gonna get together, we’re gonna talk about this, and the drink is on me.”

He was a little shocked, but as I went out and got him some booze, I told him I figured he needed that booze more than I needed a laptop. And I added that God loves us both equally, and let’s bury the hatchet before it becomes a fire ax.

You had to do that kinda thing on the streets. There was no way of escaping these people. If somebody ripped you off, the best you could do was find another Spot to sleep, so they wouldn’t know where to find you next time.

You had no door you could close and lock to keep intruders away. You were out in the open. Everybody was in everybody else’s business, and you had to accept that truth.

Looking back over six years, one of the weirdest things about homelessness was the phenomenon of feeling that you’re basically a decent guy with sound moral values, who was brought up in the 50’s on the Ten Commandments, and who was engrained to love God and love his neighbor as himself — and yet, you were thrown in the same bag with hardened street criminals, and people who — unlike Blue Boy — simply did not give a flying hoot about any other human being.

I can’t give statistics, but in my experience about 25% of people I knew who were homeless in Berkeley were decent people who fell out of luck and could not keep up their expenses in the Bay Area. Another 25% were people with severe mental health conditions or dual diagnoses. Maybe 25% were people who lost house and home due to a drug or alcohol problem. Finally, the remaining 25% were professional street people, living on the streets by choice. Sometimes, these people were second generation, having been brought up by other street people, and trained to steal laptops and cell phones from an early age.

The frustrating result of this hodgepodge was that all across the board, social workers and homeless rights activists were unable to distinguish the bad guys from the good guys, because we all looked alike on the streets. Social workers might dismiss decent people as criminals, and activists might advocate for the rights of hardened sociopaths who should have been behind bars.

So who could tell the rogues from the heroes?

Only other homeless people. We were in the mix. Sometimes it was hard to tell, but there were a few basic tests that could be employed.

One such test would be to ask, “Hey, we’ve been hanging out for a while now. I gotta ask you–and don’t be offended–tell me honestly. Are you a good guy or a bad guy?”

If they responded instantly, “I’m a good guy,” then they were probably a bad guy.

If they said, “Well, I try to be a good guy,” then they were probably a good guy.

And of course, people pick up reputations based on their behavior. But it was highly individuated and it crossed stratifications. We don’t think of there being “good tweakers” in normal, civilized mainstream society. On the streets, there were good tweakers and bad tweakers.

Crystal meth will destroy a person’s life in the mainstream, and actually enhance a person’s life on the streets. Street drugs became the psych meds of the homeless realm. And psych meds don’t do a heck a lot of good when you can’t keep a regular eating or sleeping schedule, and your life is all over the map.

To be truthful, looking back, if I had known that I was ADHD in those days, I might have had an easier time getting out of the mess. Some of the ADHD symptoms that are a wee bit inconvenient in indoor society are almost deadly on the streets. You can’t get lost in a “deficit” — you might get a gun to your head. Or how about succeeding at nine tasks oriented toward achieving indoor living, and then bailing out completely in true ADHD fashion on the final task?

You don’t get a second chance at that stuff. You’re right back to square one, to the very spot where you slept before all your ambitious plans failed you.

The streets are dark.

But they provided the most amazing experiences of my life. They gave me source material for my creative writing. The streets catalyzed my entrance into journalism. They stimulated my call to activism. And they inspired some of the better music I have been able to compose thus far. Looking back, I am more than grateful for all the years I spent on the streets.

www.tracy-simmons.com
Previous As Monkeypox Spreads, Global Organizations Mobilize Faith Networks to Fight Stigma
Next Ask A Member of the Church of Jesus Christ of Latter-day Saints: I Hear Satan