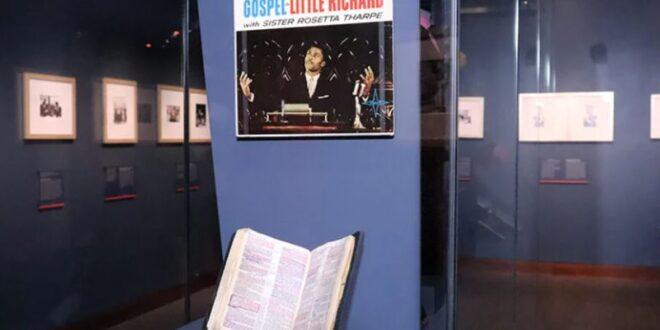 A Bible owned by Little Richard, placed beneath an album cover titled “Swingin’, Shoutin, Really Movin’ Gospel” at “Spirit in the Dark: Religion in Black Music, Activism and Popular Culture,” a new exhibition of the Smithsonian’s National Museum of African American History and Culture. RNS photo by Adelle M. Banks

The first special exhibition to focus specifically on religion since the museum opened includes photos and artifacts accompanied by quotations of famous African Americans.

Musician Dizzy Gillespie embraced the Baha’i faith and its belief in universal humanity — a concept he saw reflected in jazz, which he viewed as a blending of musical elements from Africa and Europe.

Activist Angela Davis, faced with the horror of bombings by white supremacists as a youth in Birmingham, Alabama, took part in interracial discussion groups at her church.

Singer Tina Turner practiced both recitations of the Lord’s Prayer and chants of Buddhist Scripture.

The religion and resiliency of Black Americans are featured in “Spirit in the Dark: Religion in Black Music, Activism and Popular Culture,” a new exhibition of the Smithsonian’s National Museum of African American History and Culture.

“Every man prays in his own language, and there is no language that God does not understand,” jazz great Duke Ellington told Ebony in the 1960s, a time when he performed his sacred concerts in churches.

Prince, whose 1981 “Controversy” album cover is on display in a case of artifacts, also spoke of religious universality when he told Ebony: “I think God is inside everybody.”

The exhibition, a presentation of the museum’s Center for the Study of African American Religious Life, is divided into three sections, including one called “Blurred Lines,” which notes the merging of the holy and profane in the lives of many well-known Black Americans.

Eric Lewis Williams, the museum’s curator of religion, points to a 1974 photo of Marvin Gaye, drawn from the Johnson Publishing Company Archive, as a highlight for him in the exhibition.

“In the image, you see him with his hands uplifted,” he said of the pink-jacketed man, adding that Gaye’s “high fashion” head adornment “signifies that the person wearing it is under God.”

“We know he comes from the Hebrew Pentecostal tradition. You don’t know if he’s on the altar or he’s at a disco,” Williams told RNS.

The exhibition, which includes the cover of Gaye’s “What’s Going On” album, notes there is evidence of the singer’s “strong religious and sexual sensibilities” in his later music, including the songs “Sanctified Lady,” “Sexual Healing” and “Let’s Get It On.”

All 37 of the framed photographs in the exhibition are drawn from the Johnson Publishing Company Archive, which the museum and the Getty Research Institute jointly acquired in July.

Williams, the son of a Pentecostal minister, said as he looked through the archive that he realized it was full of faith.

“I just was so amazed by how religion was everywhere. And not just Christianity. You had Hebraic traditions, you had Buddhism, you had Judaism,” he said, standing before a display case and speaking to journalists during a Thursday preview. “It was just amazing. And so I knew that there was a story there.”

The exhibition’s title, “Spirit in the Dark,” is also the name of an Aretha Franklin 1970 album, highlighting a song she sang in a period of national and personal tumult after the assassination of the Rev. Martin Luther King Jr. Her father was quoted in Ebony in 1971 describing the influence of such songs: “She does with her voice exactly what a preacher does with his when he moans to a congregation.”

The museum has long included facets of religion across its exhibitions — from Harriet Tubman’s hymnal to Aretha Franklin’s “Amazing Grace” album cover, which already is in its Musical Crossroads exhibition two floors above and also is in the new display.

Among the artifacts in the museum’s collection that are on view for the first time is a Bible heavily underlined by Little Richard, placed beneath an album cover titled “Swingin’, Shoutin, Really Movin’ Gospel” that features Little Richard with blues and gospel singer Sister Rosetta Tharpe.

“What I like about his Bible is you could see his wrestling with God, the scribbles and his markings,” said Williams of the singer, who grew up in a Pentecostal tradition. “He wrestled with God and wrestled with Scripture because his community of origin did not affirm his sexuality. And so we see him raising those kind of questions in the margins of his Bible.”

Across the exhibition, the varied faiths of African Americans are highlighted as music from a special playlist can be heard featuring artists whose photos are included, from Stevie Wonder to Mahalia Jackson to James Brown.

Sammy Davis Jr. spoke to Ebony in 1960 after surviving a serious car crash and converting to Judaism: “I knew that there was more to reality than the material world,” he said. “Judaism gave me security and understanding.”

There are images of boxer Muhammad Ali and basketball player Kareem Abdul-Jabbar, who both converted to Islam in their 20s — Abdul-Jabbar to Sunni Islam and Ali to the Nation of Islam.

In the “Lived Realities” section of the exhibition, which looks at how artists and activists combined faith with their work, one display notes that Maya Angelou’s writing tools included a pen, a pad and a Bible.

“I believe it is faith which allows human beings to try to rise in the morning, after evenings of terror and fear and grief and disappointment,” Jet quoted her as saying in 1992.

Author Toni Morrison, a Catholic convert who was raised in the African Methodist Episcopal Church, told Black World in 1974, “Where, for instance, could a person go to scream out his grief among people he trusted and not be embarrassed, except in a church?”

There is a display of handwritten notes penned by James Baldwin, the child preacher turned novelist, defining what citizenship means for Black Americans. At the top of a five-point list made on stationery from a Sheraton hotel, he wrote “to confront Religion/Race/Power.”

Another artifact in the exhibition is a typewriter from the Nation of Islam’s Temple No. 7, where the congregation’s secretary transcribed notes for Malcolm X when he was the Harlem, New York, mosque’s minister.

The most imposing artifact is a mannequin bearing a splashy outfit worn by Rev. Ike (the name used by the Rev. Frederick J. Eikerenkoetter), who preached prosperity via TV and radio and encouraged his mostly poor urban audience to aspire to wealthy lives. His black suit, worn when he received a lifetime achievement award in mentoring in 2004, is accessorized with a jeweled crown tie tack and cuff link.

The exhibition, which also features an online dimension, is scheduled to be on view through November 2023.