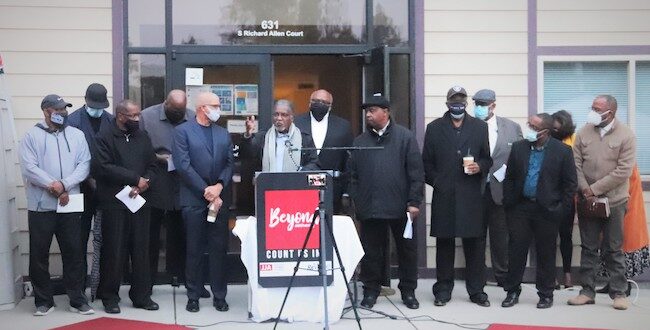 Black Christian clergy in Spokane gathered in one voice at Bethel AME Church to receive the act of repentance from white Christian leaders Friday — four months to the day George Floyd was suffocated to death by a police officer’s knee.

Organizers of “Count Us In: Beyond Words Spokane” invited white clergy in the community to participate in the event amidst a blustery and rainy evening to acknowledge their failings to fight on behalf of their Black colleagues against systemic racism and racial injustice in America.

As many as 60 white Christian clergy and leaders showed up to demonstrate their commitment to a year of anti-racist work.

Some Black Christian leaders, though, questioned the event saying it was no different from other events that have yielded no fruit.

Superintendent Ezra Kinlow, from the Holy Temple Church of God in Christ, read from a letter entitled, “Black Pastors’ Response to the White Pastors’ Confession.”

“We, the Black clergy and faith leaders from the Black community stand to call into question the authenticity of your repentance,” said Kinlow. “Even as John the Baptist questioned the confession of the Pharisees and recommended that they examine their own hearts and ‘bring forth therefore fruits meet or worthy of repentance,’ Matthew 3:8.”

These words came after white Christian leaders spoke their personal confessions of a lack of works to fighting racial injustice.

One such confession came from a leader from the more conservative evangelical branch of Christianity. Many in that faith group are known to spend a lot of their time questioning the integrity of #blacklivesmatter as a movement and how to harmonize it with their biblical beliefs in relationship to modern day politics.

Joe Wittwer, lead pastor of Life Center Church, was this leader and was the first white Christian pastor to speak at the event. He answered the question, “Why Go beyond Words” for himself.

He started by confessing that he did not want to come to this event, even though racial justice is important to him for many reasons, including grandfathering two Black grandchildren.

“Over the years I’ve been to at least a half dozen of these ceremonies of repentance and confession. We make pledges and we make promises and very little if anything seems to change,” said Wittwer.

He went on to define what repentance was—a turning from his own sin to God—and to acknowledge that even in his own heart, he is prone to wander. He said he needed to continually recognize the need in his own life to repent of his own sins that have perpetuated the injustices against his Black “mentors” and “friends” with whom he was gathered.

“Our nation suffers under the burden of its original sin of racism and white supremacy. And far too often the church has been complicit and let me add particularly my branch of the church—evangelicals,” said Wittwer. “We have been blind to our white privilege and have failed to leverage it for good when we could and should. We have ignored or denied systemic racism and our silence about it and the injustice it perpetuates have devastating consequences for our Black and Brown brothers and sisters.”

Other white clergy who spoke about “Why Go beyond Words” included the Rev. Tom Lamanna, pastor at St. Aloysius Catholic Church, who quoted Micah 6:8, “You have been told, O mortal, what is good; and what the Lord requires of you, only to do justice and to love goodness and to walk humbly with your God.” He went on from there and explained how Catholics have recently approached racial injustice within their own congregations.

Bishop Gretchen Rehberg, of the Episcopal Diocese of Spokane, spoke about how all people are made in the image of God and when people don’t act toward others with that in mind, people are destroying their souls.

“We cannot keep letting this happen,” said Rehberg. “We can’t keep just using the words. We have to act.”

At the heart of the event, Rev. Katy Shedlock, of West Central Abbey and Highland Park United Methodist Church, led all in attendance in a six-minute collective prayer of confession followed by a three-minute time of silence, calling on those gathered to first kneel during the prayer and then to lay prostrate during the time of silence as they were led and able. The time was symbolic of how long the police officer had his knee on Floyd’s neck before he died.

In conclusion, the organizers of the event invited those attending to make commitments over the next year to be more intentional and action-oriented toward the work of racial justice.

Suggested commitments included building relationships with a Black pastor or clergy leader, practicing reparations by investing in the Black community in Spokane, and using their pulpits and other means to promote anti-racism.

Kinlow, in reading the conclusion of Black clergy’s collective letter, quoted Dr. Martin Luther King, Jr.’s statement to the white clergy of his day from the Birmingham jail, “‘In the end it will not be the words of our enemy that we will remember, but the silence of our friends.’”

He continued, “You say you are ‘Beyond Words’. Then, we say, ‘We are beyond talk. We want action!’”

The hour-long event and the words spoken and commitments made, can be viewed on YouTube.

The Sept. 11 attacks changed many Americans’ faith communities and spiritual lives as much as it did how we see our world and one another.