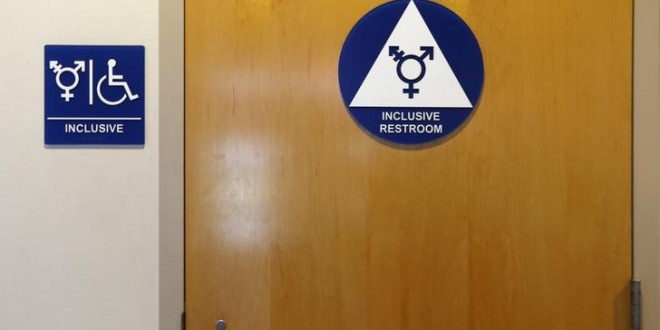 A gender-neutral bathroom is seen at the University of California, Irvine in Irvine, California September 30, 2014. REUTERS/Lucy Nicholson/Files

(Reuters) – South Carolina lawmakers have introduced a measure that would block transgender people from using public bathrooms that do not match their birth sex, despite increasing calls for a repeal of a similar provision enacted last month in North Carolina.

The legislation proposed in the state Senate on Wednesday also would prohibit local governments from requiring private businesses to provide restroom access based on gender identity rather than birth gender.

The South Carolina measure is narrower than North Carolina’s law, which precludes local governments from adopting anti-discrimination ordinances with protections based on gender identity and sexual orientation.

But opponents warned that the new proposal could spark the economic backlash seen this week in North Carolina, where PayPal Holdings Inc cited the discriminatory nature of the law in canceling a new operations center that was to employ 400 workers in Charlotte.

More than 130 business leaders, including the chief executive officers of Bank of America, Herbalife and American Airlines, have signed a letter with the Human Rights Campaign calling for a repeal.

“It has worked just fine,” she told reporters. “We don’t have to mandate respect or kindness or responsibility in this state.”

More than a dozen states have considered bathroom provisions this year that would restrict access for transgender people, according to the National Conference of State Legislatures.

The measures come amid a wave of legislation pushed by social conservatives after the U.S. Supreme Court legalized same-sex marriage last year.

What do you think? Should transgender people have access to public bathrooms?

Previous I’m the Undecided Middle Class Voter
Next Ask A Buddhist: Is Buddhism compatible with gods?