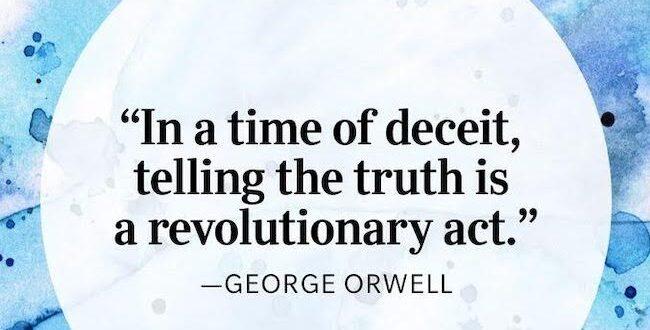 A recent FaVS post discussing “the big lie,” as reported by the media, attracted much commentary. It’s written by Scott McIntyre, a “conservative Republican and evangelical Christian going out on a limb about a practice in journalism.” Those labels would not characterize me, yet I believe we share some values in common, such as love for truth.

Occasionally Christians think that I, as a Baha’i, don’t believe in Christ. Yet I do. My understanding of the Bible and Christ’s role in religious history differs from that of those judging me. I’ve never belonged to a political party. I’m “liberal” in some ways, “conservative” in others, as suggested by the following pair of Baha’u’llah’s quotations:

“[T]he poor are the trust of God in your midst. Watch that ye betray not His trust, that ye deal not unjustly with them….”  Many would consider this admonition “liberal.”

Elsewhere he writes: “The most despised of men in the sight of God are those who sit idly and beg….” This seems to reflect a more “conservative” viewpoint. I subscribe to both.

Labels often characterize groups of people “united by actual or perceived kinship.” Such clans include families, tribes, nations, ethnic groups, political parties, religions, and even journalists. It’s easy to tar “those people” with a broad brush.

Mr. McIntyre skewers journalists who commonly accuse politicians of “the big lie.” He questions how journalists know when a politician is lying, or whether that politician believes what he’s saying. If the latter, Mr. McIntyre says, he’s not lying. Let’s examine that implied principle.

A Washington Post article recently asked, “How can journalists interview…politicians who consistently spread misinformation – without magnifying their lies?” Journalists do distort information, thereby undermining journalism’s credibility. When reading an article, I sometimes respond at gut-level as I recognize partisan nonsense, seasoned with falsifiable information. Are they lies if the writer truly believes them? Although the internet allows rapid fact-checking, the internet itself isn’t reliable. We must apply our own filters.

Mr. McIntyre raises a basic question about journalists calling the old president a liar. Labeling someone a liar is a serious charge: “[T]he worst of all qualities and the most odious of all attributes, and the very foundation of all evil, is lying,” according to ‘Abdu’l-Baha, “…no more evil or reprehensible quality can be imagined….There is no worse attribute than this, and it is the foundation of all wickedness.”

I believe it. My wife Jolie and I have, for 60 years, maintained a standard of honesty in our household, for ourselves and for our children. We also agree that the most insidious kind of lying is lying to oneself. I think we all do it whenever we rationalize. “The proof of infinity,” Jolie observes, “is man’s ability to rationalize.” At its heart, rationalization is lying to oneself about reality.

The freedom that accompanies truth is highly regarded among Christians: “Then said Jesus to those Jews which believed on him, If ye continue in my word, then are ye my disciples indeed;And ye shall know the truth, and the truth shall make you free.” (John 8:31-32)

The obverse of this statement suggests that if we don’t know the truth, we are not free. We’re prisoners, perhaps of lies told by others, perhaps of our own rationalization. Either way, we occupy a world created by our own minds, a false world. We lose touch with reality.

Liars must constantly remember the lies they tell so that others don’t catch them. Sooner or later, a pathological liar is bound to lose track of what he’s said, and to whom. He confuses his own lies with reality. Such confusion suggests serious mental derangement, in a word, insanity.

Mental health professionals have explicit criteria for insanity, derangement. Do professionals always agree on how, or whether, to apply those criteria to any individual? I don’t know the answer, but I’m enough of a scientist to hazard that they don’t. In many cases, health care professionals won’t agree on diagnosing someone as “insane.”

A case in point is internet discussion of the old president. Articles by or about mental health professionals abound. Comments range from self-serving, condemnatory speculation to serious discussion about his mental state. None is credible because none reflects a professional evaluation and diagnosis.

This raises a serious question: When someone in authority refuses to accept irrefutable evidence contrary to what he believes to be true, at what point does that individual relinquish his right to lead? This is not hypothetical; a careless answer could have major consequences for our nation and beyond.

A hallucinatory decision by a highly placed official could result in devastation beyond human imagination, such as that wrought on Hiroshima. Creators of the atomic bomb never fully understood the full ramifications of what their creation could wreak – until it happened.

Previous To Challenge or Not to Challenge?
Next E-Cigarettes and Religion: Beliefs That Vapers Should Know