Bicycling around the world, and across Spokane 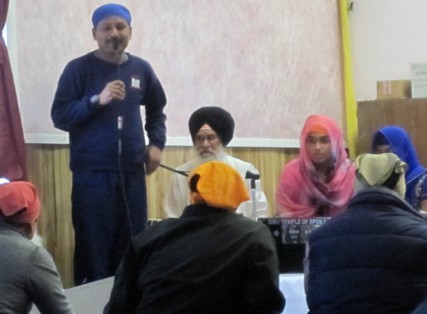 At the Sikh Temple this weekend I had the pleasure of meeting Avijit Chakraborty of India. He arrived, by bicycle, in Spokane on Friday and leaves tomorrow morning for Seattle.

Spokane was a pit stop for him on his quest to ride across the world. So far he's rode across 59 countries and has pedaled more than 37,000 miles. He stopped in Spokane because of his relationship with Gurjeet Siligh Aujl, known as Babaji, who leads the local Sikh temple. Chakroborty said he's riding for two reasons. First, is to highlight the effects of pollution on theenvironment. Second is to set a world record, which he's actually already accomplished.

You can follow his travels here. So now you know what's going on if you see Spokane police escorting a man on a bicycle tomorrow morning. Maybe you can roll down your window and yell a thanks to Chakraborty for fighting for a sustainable future.

Previous Happy Diwali!
Next Why It’s Good To Think About Death