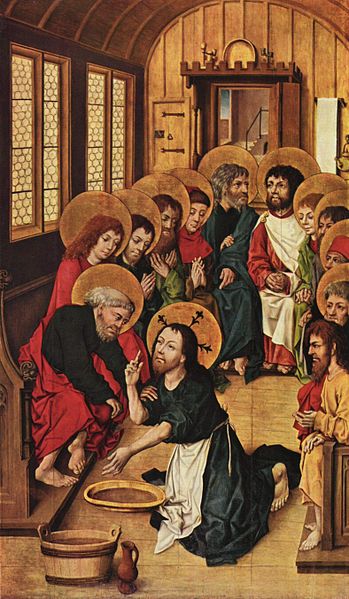 Jesus washes his disciples feet/image circa 1475

No clue.  They have no clue.

I tied a towel around my waist, filled a big bowl with hot water and carried it into the hallway where they were sitting around on benches, waiting for the women to announce that Passover was ready. Water sloshed across my hands onto the floor.

“OK, off with those sandals and roll up your jeans, guys.  Your feet need washing.  They’re filthy.  Disgusting, actually.  It’s time for me to clean them up.”

Conversations stopped, a couple men immediately fumbled with the buckles of their Birkies, and then they all just stared at me.

He muttered and turned deep red under his tan.  “I don’t like this.  It’s embarrassing.”

They watched as if no one had ever washed their feet before—which wasn’t far from true.  They’d showered, occasionally scrubbed their feet.  I lathered up a corner of the towel with soap and got at it.  James and John alone turned the water a rich brown.  One bowlful was not enough.

They hadn’t moved when I got back from the kitchen with fresh water and a new towel.  I washed Thomas who looked as if he were going to cry when I rubbed some salve on a nasty cut on his ankle.

He shrugged.  “Cash box hit me when you flipped those tables over at Temple.”

Not an impressive line of guys: sweet Nathaniel, Andrew, who doesn’t look (or smell) like his brother, Bartholomew, John, whom I will trust to the end of time, squirrelly little Matthew.  I was on the fifth bowlful when I got to Peter.  He still had his Birkies on, arms tight across his flannel shirt.

“Not gonna happen.  You…washing my feet.  Not in this lifetime.”

He lowered his chin and squinted at me.  Such a fish guy.  Literal to his core.  Perfectly predictable.  One…two…and he caved.

“All right then,” he bent over and yanked off his sandals.  “When you’re done down there, do my hands.  And I need a shampoo, too.”  He glared at the others, daring them to interfere.  Andrew rolled his eyes.

I rocked back on my heels and pushed my hair out of my face.  “It’s like this.  You’re mostly clean, really.  Had showers this week.  Minimal smelliness.  But your feet—you wander all over everywhere.  All kinds of stuff…wading through…whatever.  Like I said, disgusting…”

“…Except you.  I don’t know how you do it, friend, but you manage to keep your feet clean all by yourself.”  His mouth twisted, half-embarrassed, half-‘What else would you expect?’”

Got him on that.  Yet they’re all totally confused.  Like I suddenly started speaking Latin.  Trying so hard to sort out what I mean, so utterly unprepared…for the next step.  I took a deep breath and tried again.

“Look at it this way.  I told Peter you were clean.  Sure, I’m talking about this.”  I patted Peter’s gnarly foot still resting on my knee.  “But I’m not just talking about feet.  All these months together, you kind of get what I’m about.  Actually listening when I tell stories.  You’ve learned to stop shooing the kids away—that women are people.  A lot of the time, you’re understanding what I’m saying about the Kingdom of Heaven—learning how to love Elohim the way you love me.

“Try for the metaphor, guys.  Our feet are down there.  We pay no attention to them.  We get up, walk, slog…well, what I said before.  I’m not shaming you into better hygiene.  It’s a fact of life, this walking.  Feet get dirty because we use them, so,” I picked up Peter’s foot, “they need cleaned.  By me.  As does yours,” and I put my hand across that smooth skin of Judas’s instep.  He instinctively pulled it back.  His eyes were cold, high color in his cheeks.

“Elohim is saying to me, ‘This is your duty.  Scrub the feet of your brothers.  If you serve them, they will not forget.’”

But they’re too humiliated to comprehend the mercy.  They only see its weirdness.  Thomas put his head in his hands and groaned.

And what I have comprehended: this moment, this posture, me washing their grubby feet; they, protesting, shaking their heads—has frozen in time—just now.  They won’t forget.  The ripples have begun circling through time.  A drop of water that will outlast Rome and all the civilizations that follow.

Knees aching, I carried the bowl back to the kitchen.  Tossed the last towel on top of the pile.  Somebody, some invisible woman, was going to have to wash them and so serve all of us.

Back in the hallway, Judas was pulling out his cell phone, buzzing like a trapped fly.  He turned, apologized with a dip of his head.

“Be back in a minute,” and, phone to his ear, went downstairs.

Probably the smartest of the bunch, Judas, but he never quite let me in.  Couldn’t, wouldn’t let me serve him.  And the deadly cold flowed over me, unbearable pain, falling, falling, out of the room, out of time, far as far from Elohim.

Then it was gone.  There they still sat, silhouetted against the windows, still with confused hope in their eyes that will be shattered…so soon.

What will come, will come.  To turn aside now will upend the universe: shatter the silence of choice at the center of my own story.

“Let’s go into dinner, fellows.  I think they’re ready for us.”

Previous BRIEF: GU Speaker to discuss mass spying
Next Can you help this teenage cancer patient find a Golden Retriever?