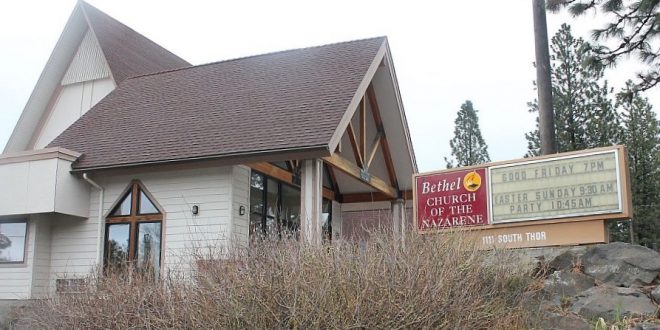 Bethel Church of the Nazarene in the 1100 block of south Thor, Spokane, was vandalized and burglarized overnight and the police department is asking the public for help solving this case.

According to a press release a urinal and drinking fountain were ripped off walls, a sink was ripped out of the counter, cupboard doors were ripped off their hinges, miscellaneous food items were strewn about the church, and other items were moved and broken.

In addition to an estimated $2,000 or more in damage, the youth pastor’s guitar was stolen.

The stolen guitar is not the specific guitar in the picture, but is nearly identical including the in-lay design on the 12th fret. It’s described as an Alvarez guitar with a Fishman pickup installed. It also had a green floral design strap attached.

Anyone with information about who may be responsible is asked to call Crime Check at 509-456-2233.

Cate Wetherald was raised in the Bible Belt, the progeny of an excommunicated Roman Catholic and a biblical fundamentalist. She first encountered theology at at Lyon College, affiliate with the Presbyterian Church (U.S.A.), while earning her Bachelor of Arts majoring in communications and minoring in English and theatre. She has a Master of Arts in Pastoral Ministry from Gonzaga University, and is a trained spiritual director. She has written extensively for publication in multiple formats, and most recently was the director of communications for the Episcopal Diocese of Spokane.

Previous Ask A Buddhist: Meditation techniques
Next Coffee Talk: How the Faith Community Should Respond to Mental Health