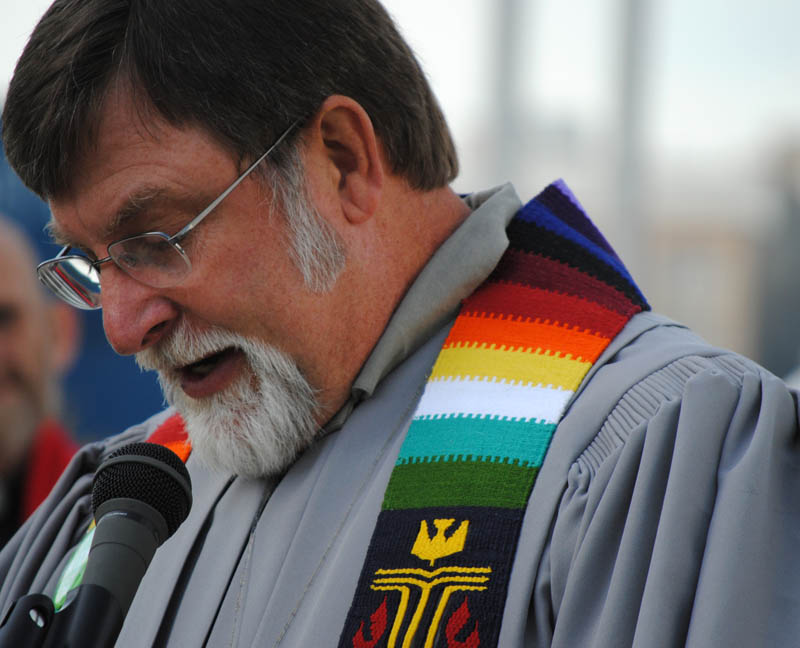 Many people look at retirement, and dream of renting an RV to snowbird in Arizona, purchasing property near Myrtle Beach or popping open a parasol in Florida’s Key West. But for Rev. Paul Rodkey of Bethany Presbyterian Church, his plan is a little different.

After nearly 30 years as pastor, Rodkey, with his wife, Kerri, has decided to join the Peace Corps, tentatively placed in Botswana.

“Paul will be greatly missed,” said Nate Brantingham, ruling elder of Bethany. “We’re proud that his first decision given retirement was to join the Peace Corps. We’ve got some Paul pride.”

What Rodkey calls courageous, some call scandalous. Through the years, Rodkey and his congregation have spoke out against controversial topics, such as war and homophobia, causing fellow Christians much consternation, Rodkey said.

“We believe in that whole Ten Commandments thing,” Rodkey said. “We don’t see the words ‘unless’ or ‘except’ after that.”

The congregation is accustomed to seeing protesters in front of their church, located at 2607 S. Ray St. on Spokane’s South Hill. On one cold day, Rodkey noticed the temperature and brought coffee outside to warm the picketers. Some accepted the offer, he said, and some, of course, did not.

In his 44 years with the Presbytery — he graduated from Whitworth University and started as a youth minister in various cities in the state — he’s seen the church transition, but not always in a good way.

“With the wisdom of time, you can look back and see, as Clint Eastwood would say, ‘the good, the bad and the ugly,’ ” he said.

More than 20 years ago, the Inland Northwest AIDS Coalition was kicked out of a church where they regularly met.

“One day, a woman came in with a train of guys who all had AIDS,” Rodkey said, noting they were strangers to the congregation. “They came in, sat down … and participated in worship.”

It just so happened to be a Sunday on which Bethany shares communion.

“They had lesions, were on drugs — which were experimental at the time … They got that most of the church didn’t want them around,” Rodkey said, “and here I am giving them communion.”

That acceptance wasn’t common practice in the early 1990s, nor was performing same-sex marriages when Washington state began accepting licenses in 2012. The law had no bearing because some churches still barred same-sex couples.

That same year, Rodkey told The Spokesman-Review church leaders were afraid to accept same-sex marriage, not out of their reading of the Bible, but out of fear that congregations or members will leave, taking their money with them.

“We’ve had a rocky relationship with the Presbytery, because they’re afraid,” Rodkey still says today.

Rodkey points out that conversion is not up to pastors or congregations, but instead it’s between each person and God.

“Jesus Christ didn’t go around doing that (conversion),” Rodkey said. “In fact, he didn’t give a rip. Instead, he walked around and said, ‘Hmm, look it here. Here’s a broken spirit.’ … Jesus wasn’t around making people convert, he was trying to make them whole, or holy or healed.”

Those in the LGBT community, and even ex-pastors are part of Bethany’s congregation, Brantingham said.

“For a lot of people who have been hurt or damaged by the church, (Rodkey) kind of speaks to them,” Brantingham said.

And those are just a few examples of people with whom the church needs to be, Rodkey said.

“The church needs to be where the hearts are broken and to be in a place where they can offer a ride,” he said. “The arrogance of this church thinks they know the answer — and they don’t. They don’t want to be helpful, they want to be right.”

Moving forward, Bethany will begin a pastoral appointment process following Rodkey’s last sermon June 19, which just so happens to be Father’s Day — he’s a father of two and step-father to another pair. The Presbytery of the Inland Northwest will assist in their selection, providing them an interim pastor, who “will guide us through some soul-searching stuff,” Brantingham said. Appointing a new pastor can take months, or even years, Rodkey added.

While the congregation works to fill Rodkey’s shoes, he and his wife will be overseas for 27 months in an African country a little smaller in size than Texas. Botswana has the second-highest infection rate of AIDS in the world, according to a 2014 estimation by the U.S. Central Intelligence Agency, at a little more than 25 percent. Rodkey will work in the schools, while his wife will work in municipal government.

Rodkey has to clear out his desk before July 30, when he departs, and he’ll have to sift through stacks of papers, books and bibles. But he may leave behind a large funnel that he stores in his office. He sometimes mentions the metal piece as a threat — “Don’t make me pull out the funnel” — or, more commonly, a metaphor: Churches can either pack the entire world in, condensing it and fearing it, or they can look through the funnel, ever expanding their view.

“Are we domesticated and tamed — therefore we have to agree with everything Conservative, Evangelical and blind — or do we see the world through the bigger lens, the bigger dream?” Rodkey said.

Previous April Coffee Talk: Faith & Film
Next Viewpoints: What does Easter mean to you?