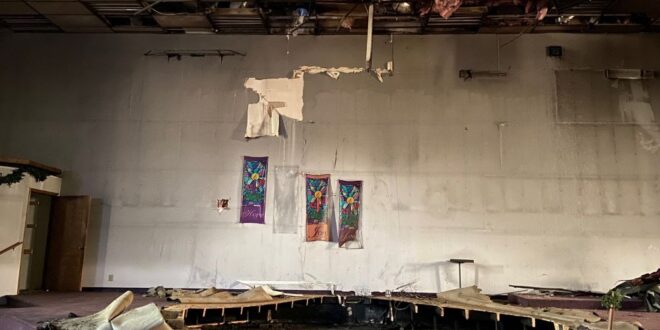 Nearly six months after a fire that severely damaged Bethany Presbyterian Church’s sanctuary, congregants are coming together to discern what God has planned for their new building and their future identity as a church.

Like most other houses of worship, gathering during a pandemic was difficult, said Bethany Presbyterian Elder Dirk Vastrick. Then, just as they were beginning to meet in person again, the fire — thought to be caused by an electrical issue — left them without a building. On top of that, Bethany Presbyterian’s senior pastor became ill in April and will be on short-term disability leave for the next three months.

“It’s not what we would have picked for ourselves — we certainly wouldn’t have picked a fire,” Vastrick said. “But we are setting the tone by looking for the opportunity that exists in this rather than the loss.”

Bethany’s members started gathering earlier this month for a process known as discernment, in which they hope to quiet their inner voices and reflect on what God wants them to hear.

“We come to this discernment process with open hands rather than closed fists. We need to be open to different options that maybe we don’t want to be open to,” said Katie Stark, missional expeditor for the Presbytery of the Inland Northwest.

During their first discernment meeting, congregants focused on their membership numbers, the church’s neighbors, their identity as a congregation and their mission statement. They also had a station for congregants to dream about what a new building would look like if money was not a concern, Stark said

She said she encourages churches to experiment and be open to what God is inviting them to do. Especially during the pandemic, churches have had to pivot in the way they serve their community — whether by providing daycare for essential workers or offering meals to school workers.

Ultimately, a church is the people, not the building, and a building should be a tool for the people to serve the community, Stark said.

Vastrick said congregants consistently said they still want to meet together in person, and they want their new building to be “right sized.” Bethany’s building used to be a community center, and members worshiped in a two-and-a-half story redecorated basketball gym — making it feel too large for a congregation of just over 30 people.

“There is a tendency to just say, ‘well, let’s fix it up and get back in,’” he said. “And we were back there for a couple weeks, but very quickly realized we needed to be doing more listening to what God was leading us to.”

The church has been temporarily meeting for worship at Southside Community and Senior Center — just across the street from their old location on Spokane’s South Hill. Hamblen Park Presbyterian Church has provided a space for their discernment meetings, Vastrick said.

“We’re kind of wandering in the wilderness for a bit,” he said. “But we know there is a promised land … and we’re being taken care of. God walks with us every day.”

Some things have not changed for the church, Vastrick said. Their missional focus on settling immigrants and advocating for homeless populations and other marginalized groups will stay the same. Bethany is also an open and affirming congregation.

The connectional nature of the church has been a great comfort during this time, he said. There are several members of the congregation who can preach while their pastor is on leave, and the Presbytery of the Inland Northwest has been helpful in lining up guest preachers.

“We’re able to do more than just one little congregation … would be able to do on our own because we’re gathered with all of these wonderful congregations elsewhere who all want to glorify God and enjoy him forever,” Vastrick said. “There is good to be done, and our job is to walk that walk and be the loving neighbor to everyone.”