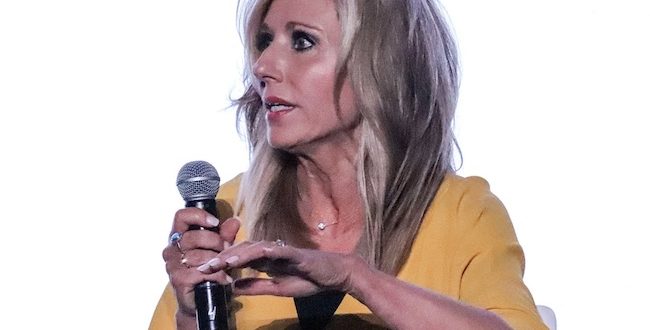 Author and speaker Beth Moore speaks during a panel on sexual abuse in the Southern Baptist Convention at the Birmingham-Jefferson Convention Complex in Birmingham, Alabama, on June 10, 2019. RNS photo by Adelle M. Banks

In a Twitter thread Wednesday (April 7), Moore took aim at complementarianism, the 20th century theological framework that argues men and women were created for different roles and that effectively champions male headship and female submission.

For some evangelicals, complementarianism is a line in the sand. Those who question it are seen as undermining belief in the Bible. Moore said that was wrong.

“Let me be blunt,” Moore tweeted. “When you functionally treat complementarianism—a doctrine of MAN—as if it belongs among the matters of 1st importance, yea, as a litmus test for where one stands on inerrancy & authority of Scripture, you are the ones who have misused Scripture. You went too far.”

She also apologized for her past view on the matter.

“I beg your forgiveness where I was complicit,” she said on social media. “I could not see it for what it was until 2016. I plead your forgiveness for how I just submitted to it and supported it and taught it.”

In an email to Religion News Service, Moore didn’t go quite so far as to say she has entirely abandoned complementarianism. But she no longer sees it as essential.

“I’m not going to be pushed into either category right now because that’s not my point,” Moore wrote in response to a question about whether she was still a complementarian, or its counterpart, an egalitarian. “My point is that it has taken on the importance of a first tier doctrine.”

But apologizing for her role in supporting and elevating the importance of that theology, which she had submitted to, is a major step for Moore.

Some female historians said Moore’s tweets were a decisive shift. Beth Allison Barr, a Baylor University historian and author of “The Making of Biblical Womanhood: How the Subjugation of Women Became Gospel Truth,” likened Moore to the biblical Joshua commanding the people to shout so the walls of Jericho fall down.

“She just shouted,” said Barr of Moore. “This is going to be the beginning of the end of complementarianism.”

Since 2016, Moore has taken to Twitter to criticize male evangelical leaders without challenging the view that women cannot be ordained or preach from the pulpit. She often referred to herself as a “soft complementarian.”

The Rev. Tom Buck of First Baptist Church in Lindale, Texas, an outspoken critic of SBC leaders, tweeted that a “plain reading” of a passage from the New Testament Book of 1 Timothy bars women from teaching or preaching the Bible to men in the church.

He was referring to a passage from the Apostle Paul’s letter to Timothy in which he said: “A woman should learn in quietness and full submission. I do not permit a woman to teach or to assume authority over a man; she must be quiet.”

Bible scholars point to other New Testament letters attributed to Paul that convey different attitudes. Paul also allowed his contemporary Phoebe, a female deacon, to read aloud to a house church. Paul thought highly enough of Junia, a woman, and her co-laborer Andronicus, that he commended them both as “noted among the apostles.”

But over the past 20 years, Southern Baptists, along with other mostly white evangelical denominations, launched an industry of books, devotional literature, conferences and seminary programs celebrating “the dignity” of traditional gender roles in which wives submit to their husbands in the home and only men can preach in the church. Many have suggested that as Jesus is subordinate to God the Father, so women must be subordinate to men — a heresy for most Christians who view the three members of the Trinity as equal.

“This whole complementrian ideology is a historical construction,” said Kristin Du Mez, a Calvin University historian and author of “Jesus and John Wayne: How White Evangelicals Corrupted a Faith and Fractured a Nation.” “All the packaging that comes with it — what it means to be a man, what it means to be a woman — that’s a historical and cultural creation, even as it’s packaged and sold as timeless, inerrant and biblical.”

Moore’s outsize role — she has filled arenas and concert venues for her Bible teaching conferences and sold millions of devotional books, becoming better known than any of her male counterparts — has always raised tensions around complementarianism.

In 2019 she even joked about preaching in church on Mother’s Day. Los Angeles megachurch pastor John MacArthur responded that Moore should “go home.”

For Moore, much of her reappraisal of the role of women in the church arose with the election of Donald Trump in 2016 and the pre-election debate over the now-infamous “Access Hollywood” tape, in which Trump boasted about groping women’s genitals. The ongoing sex abuse scandal in the Protestant churches and the subsequent #MeToo movement also contributed to it. Moore has acknowledged she too was sexually abused.

On Wednesday, Bible teachers in her mold, such as Jacki C. King, congratulated Moore for her words.

“I am so deeply grieved and sorry for the hurt and deep losses you have taken from your own,” tweeted King, who is also a Southern Baptist pastor’s wife. “It is the deepest sting and betrayal. Thank you for paving a way, for being faithful, for your example. I think and pray for you so often. Thank you sister.”

Previous 5 Advice for Keeping the Faith in College
Next How to help your partner battle gambling addiction?