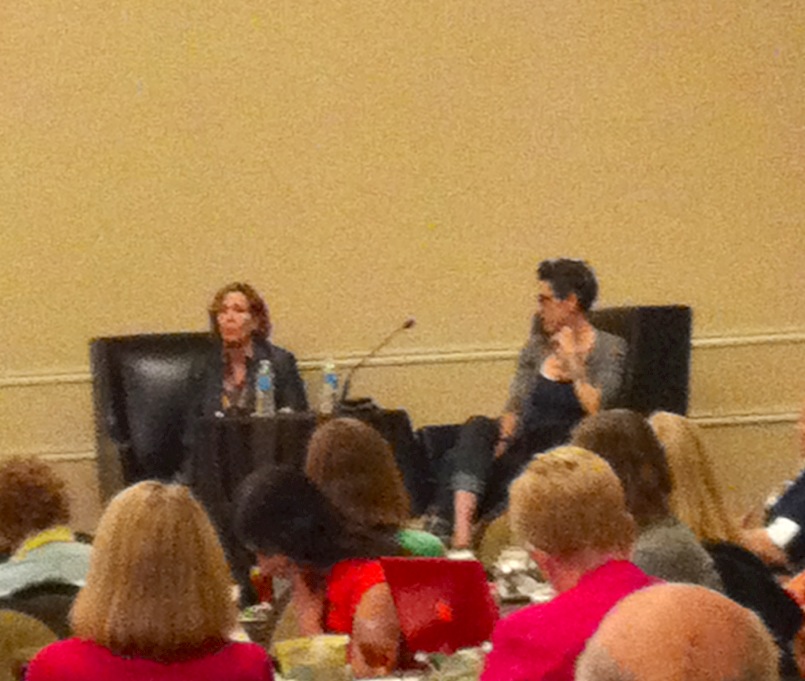 You guessed it. We lunched with the Rev. Nadia Bolz-Weber and Sara Miles.

Bolz-Weber is the author best-selling book,”Pastrix” and is the pastor and founder of House for All Sinners and Saints in Denver. Miles is the director of St. Gregory’s Food Pantry in San Francisco and has penned several books including “City of God: Faith in the Streets,” expected to be released in January.

The event was mostly a Q&A with journalists and I think the best way to capture it is with the one-liners below.

.@Sarcasticluther: I’m not responsible for what the people in my church believe. I care about what they hear. #RNA2013

“It helps to have a sinner as a Pastor.” @Sarcasticluther #RNA2013

@Pontifex steals all his best stuff from @Sarcasticluther #RNA2013

“Nothing says ‘He is risen’ like a chocolate fountain in the baptismal font.” –@Sarcasticluther at #RNA2013

.@Sarcasticluther hearing confession is often “boring, like people aren’t trying hard enough.” Helps to have a sinner for a pastor #RNA2013

Sara Miles: “The Spirit blows everywhere, even inside the Vatican.” #RNA2013

“If a church is doing it right, it’s uncomfortable.” @Sarcasticluther #RNA2013

Sara Miles: Strangers come in, mess up what we do – but our salvation depends on welcoming stranger 2 keep catholicity of church #rna2013

.@Sarcasticluther: if we had sentimental praise music I would have no more young people in my church. #RNA2013

@Sarcasticluther Other churches freak out with drag queens at church, @HFASS freaks out re: suburbanites in Dockers. #RNA2013

MT @ETenety: Miles on Ash Weds on streets: Stunning “how many people want to be told that they’re dust & that they want to die” #RNA2013

And now for an an “inappropriate” stewardship video:

Previous Ask A Mormon: How do you reconcile the Book of Mormon with conventional history?
Next Thank you, Spokane.