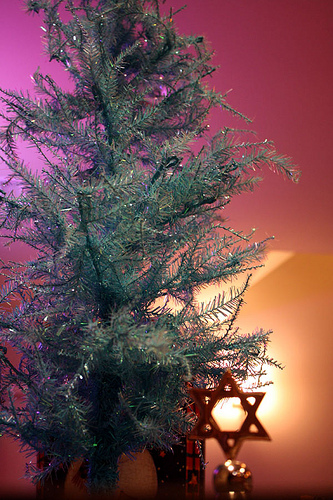 Being Jewish at Christmastime 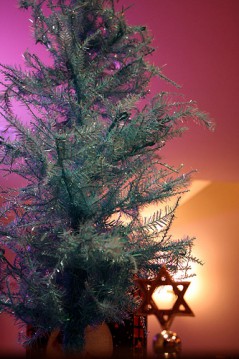 A recent discussion at my shul, Congregation Emanu-El, introduced me to Sue Fishkoff’s essay “My Family Tree is Loaded with Tinsel.” In this short but insightful piece, Fishkoff cracks open a quiet taboo of American Jewish life: what some Jews do at Christmastime. She writes that while many of her fellow San Franciscan Jews will be participating in the modern tradition of eating Chinese food on Christmas, she will be celebrating the holiday at her non-Jewish mother’s house.

Cue exaggerated gasp: What? A proudly self-identified Jew – and a staff writer at a Jewish newspaper, no less! – engaging in Yuletide merriment? Yet, as Fishkoff observes, American Jews and Christmas are hardly frenemies anymore: “In this country, one out of every two Jews marries a non-Jew, and those non-Jews have parents and siblings and uncles and aunts. That’s a lot of Christmas trees.”

Indeed. One of those Christmas trees stands tall and proud – well, proud, at least – in my living room. I picked it out at Greenbluff with my girlfriend, who is Lutheran. But even if we weren’t dating, I might very well have wanted a Christmas tree. My father, who died in 2003, was Jewish, and my mother is, too. Yet my dad’s first wife was raised Christian, so they and their three children celebrated both Christmas and Chanukah each December. After marrying my mom, my father didn’t want to give up Christmas.

My father’s unconventional wish shaped my childhood. Before I ever attended Hebrew school, I believed in Santa. Six weeks before my February bar mitzvah, I’d unwrapped presents on Christmas morning, as I did every year. As a young child, I loved Christmas so much that I asked my father one night, as he put me to bed, whether I could be Christian. He told me we could talk about it down the road. “Just don’t tell your grandmother,” he said, before turning out the light.

But even my grandmother, who fled Nazi Germany and married a fellow Holocaust survivor, didn’t seem to mind my family’s Christmas celebration. She came with us on Christmas Eve when we sang carols around the piano with two families – one Jewish, one Christian – we’d known for decades. She opened presents on Christmas and watched with glee as I discovered the ones she’d bought me. Each year until my father died, we four Jews gathered by the fireplace on Christmas Day to enjoy some unabashed holiday cheer.

Today, when I tell people I celebrate Christmas, I do so with a mixture of pride and caution. Sometimes I’m worried about what other Jews will say. In theory, I should also worry that I’m giving non-Jews the wrong idea about Jews: that we’re so culturally confused that we’ll gaily adopt whatever holiday the majority group — Christians — can seduce us with.

A nonreligious person once accused me of submitting to that notorious oppressor, Christian America, by celebrating its flagship holiday. And while the personal is political, it doesn’t make sense to let other people dictate the political meaning of your personal practices. That’s not much more empowering than cultural oppression. I’d rather learn to live in harmony with the majority culture than build my identity around angry resistance.

What my father impressed upon me about Christmas was that it was one of several winter holidays with a common purpose: to bring light and warmth into dark, cold nights. Christmas, Chanukah, Kwanzaa, and Solstice are all part of a cultural program we use to help us get through the bleaker months. These holidays share a focus on togetherness — which, ideally, means love. And there are few spiritual values more universal than love.

Whatever your December festivities, may they be merry and bright.