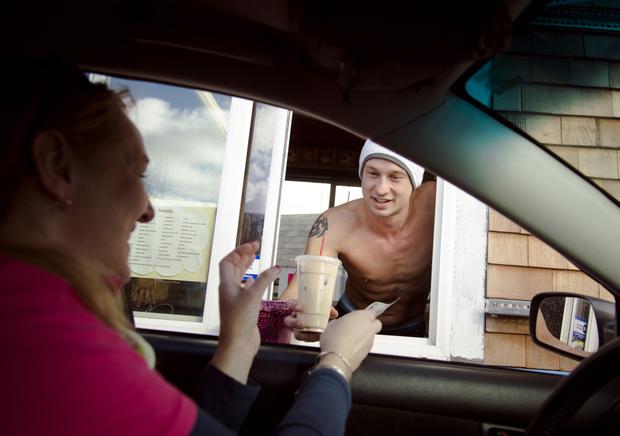 Beefcake vs. bikini: Checking my biases about Spokane baristas

Just in case you hadn’t heard yet, ex-stripper Chris Mullins has turned small business owner and “beefcake barista.” “Hot Cup of Joe” is a new drive-through espresso that has taken over the building where “Tailor’s Bean Shack Espresso” used to be on Ash Street in Spokane. The catch? He and his two male baristas have gained national attention, because they serve coffee to their customers while shirtless. According to an ABC News blogger, Mullins opened the espresso stand partially in response to Spokane’s supposed bikini barista “tradition.” The blog post also reports that Mullins has bikini barista friends who thought it’d be a good idea and that he thought he might be able to cash in on “the recent Hollywood ‘Magic-Mike’-type craze.”

Would we even be talking about this coffee stand if Spokane and Spokane Valley City Councils hadn’t just finished discussing the bikini barista issue in this area? I think that “Hot Cup of Joe” is a bold and unique idea with the potential to make Chris Mullins a successful businessman. It even opened on Valentine’s Day, which I doubt was an accident, and he is quoted by the Huffington Post as promising that his stand won’t be the site of any indecent exposure (unlike some bikini barista stands that you may have heard of). This guy has a strategy in mind. I also think that the unintended light his coffee stand might bring to gender inequality issues is fantastic.

For example, I drove by the stand on Thursday (Feb. 20) and in conversation with my friends later, found myself having to check my biases. My immediate reaction was positive, but I had to stop myself mid-smile and mid-thought — my reaction to bikini barista stands has never been that simple. Though my stance has been that I don’t necessarily see a problem with women serving coffee in bikinis or other swimsuits, as long as they are doing so by choice and aren’t prostituting themselves, I do have a problem with women in thongs and pasties serving coffee, i.e., bikini baristas versus lingerie coffee shops. I have held this opinion mostly for the same reason that many mothers do: if it’s not something that you should see at a public beach, park or playground, it shouldn’t be in a coffee shop.

Still, even if a woman has a right to work these jobs, I have an aversion to bikini barista shops and would never want my best friend, boyfriend, father or brother visiting one. On the other hand, my initial response was to have absolutely no problem with this new “beefcake barista,” the male version of a bikini barista. For half of a second, I even considered stopping by one day — just to see what all of the fuss was about and if the men really were as friendly as the ABC News blogger reports.

Even this momentary thought, which was quickly thrown out of my mind as a bad idea, is at odds with the revulsion I exhibited when some months ago, a close male friend of mine jokingly suggesting opening such a coffee shop to fund his college expenses. He wasn’t serious, but I was adamantly against the idea — even as a joke. These beefcake guys are someone’s best friends, brothers, fathers, sons, boyfriends or husbands, too, though. Even as an independent-thinking, college-educated woman, I had to check myself and take a good look at what might be a double standard or even a gender bias in my subconscious thoughts.

As a Christian, I have to ask myself what my response should be to these espresso stands. I do not feel like I am in any place to judge; I don’t know these people’s stories, but where do I draw the moral line? Where do we as a community draw the moral line? What are we saying as a city with these coffee shops and our discussions around them? What should the faith and interfaith communities’ responses be to these types of local business? Why are beefcake baristas totally OK while bikini baristas are taboo in our society?

Photo first appeared in the Spokesman-Review, our news partner.