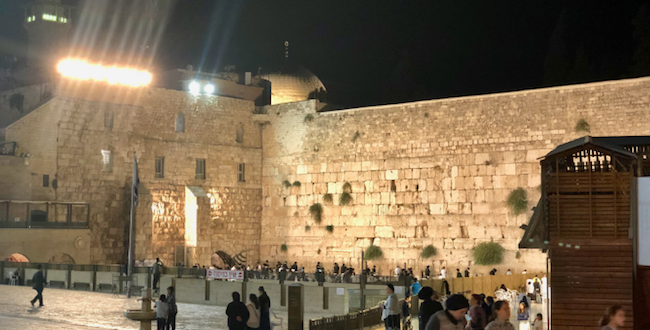 Because He Loves You: My Journey to the Western Wall

As I said in part one of my series “Because He Loves You: My Journey to the Holy Land,” I will take my readers to my next stop The Western Wall, also knows as Wailing Wall or Kotel and Buraq Wall in Islam.

The Western Wall or the Kotel is the most significant place for the Jewish people all around the world. This wall is the remnant of the Temple Mount. Temple Mount was the Mount Moriah.

According to Jewish beliefs, the importance of the Kotel is best explained as follows:

After walking for a long time through the historic streets of Jerusalem I arrived at the Kotel. My friend Sonja and her son Isaac were with me too. We had to go through security and then come to the other side of the open area-facing the Western Wall on the right side. It was almost midnight but we were refreshed with seeing so much beauty of faith around us. Isaac was thrilled to read his name on the welcome monument as the story of Isaac was inscribed on it.

Once again my feelings were beyond words could describe and I was overwhelmed with where I was. I never thought there would be a day that I can witness the Kotel that is so sacred to my fellow ‘People of the Book’.

I have to admit I wanted to leave a prayer in the holy stones however, I do not know why I could not do it. But later on I found out, I could send a note online to be placed between the holy stones and I will do that now. I stood there lost in my emotions, looking at the women young and old all with their heads covered, bowed and wholeheartedly reciting their supplications.

This is what a faith is when one is dissolving in its gravity by forgetting its surroundings. This is what the faith teaches us. This is what my faith taught me, this is what I also observed on the other side- The Muslim side, both in the Al-Aqsa Masjid and then in the Kotel.

Just like the Muslim religious tradition, men and women were separated. The Kotel was divided, one side for men and one for women. The atmosphere was pure and the breeze was smooth.

I always wonder we have so many similarities yet why these differences matter. It’s a matter of acceptance and respect only and giving each other a little bit of space to breathe.

It was a short but sweet journey. I stood there with open hands in the air praying for the unity of mankind and offering my gratitude to the Almighty Allah (GOD). Once again we exited through a security gate to the other side of Jerusalem.

In the next part of my series I will take my readers to another refreshing and beautiful city of the faith Bethlehem – The biblical birthplace of Jesus and a major Christian pilgrimage destination.

As always feel free to ask me questions about my journey and share your spiritual experiences in the forum’s post.  In case you missed the first part of this series just click below to see my other publications.

If everyone who reads and appreciates FāVS, helps fund it, we can provide more content news like this. For as little as $5, you can support FāVS – and it only takes a minute. Thank you.