Home / Commentary / Because He Loves You: My Journey to the Holy Land 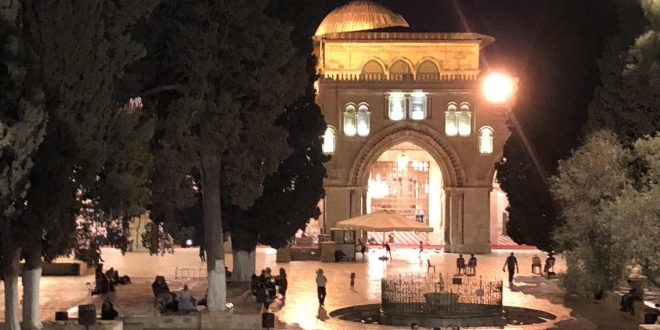 Because He Loves You: My Journey to the Holy Land

The title of my writing is dedicated to a dear friend. I was so overwhelmed when I entered the city of Al-Quds (Jerusalem) and then Masjid Al-Aqsa (Mosque Al-Aqsa), I turned back and asked my friend, “I can’t believe I am here what have I done to deserve this?”

My friend without hesitation uttered four words that will remain with me forever: She simply said, “Because He loves you.”

As we continued our walk I told myself that I would never ask this question again. Instead, I will simply remember His love for His creation.

Now that I have shared my sentiments, I will move on to share my spiritual journey in parts to the holiest places on earth for the monotheistic religions, Islam, Christianity, Judaism and Baha’i.

In part one of the article I will share my journey to Masjid Al-Aqsa. In later parts of the series will include my experiences of  “The Western Wall, City of Bethlehem and The second most respected Baha’i religious site.”

My journey started in Amman, Jordan with my dear friend Sonja.

We departed from Amman to go to Israel through Allenby Bridge border crossing. The Allenby Bridge, also known as the King Hussein Bridge, is a bridge that crosses the Jordan River near the city of Jericho, and connects the West Bank with Jordan, according to Wikipedia.

After going through the security and immigration process at King Hussein Bridge terminal, we boarded the bus to go to the Allenby Bridge terminal operated by Israel airport authority. The security was very tight at the Israel terminal and immigration did not take much time for me, but since my friend had Palestinian heritage she was questioned for a little while. Nevertheless, we got cleared and embarked on our journey towards East Jerusalem.

Once we checked into the hotel, my anticipation was increasing so we set off to offer prayers at Al-Aqsa Masjid. Masjid Al-Aqsa is located in the old city, Al-Quds (city of Jerusalem) that has seven doors to enter. We entered from Bab-Ul-Amoud. First, we stopped at my friend’s older relative to show us the way to the Aqsa mosque. She happily agreed and we set off together. While walking towards Al-Aqsa I was thrilled and fascinated and was thinking about how I was walking the same footsteps that many saints and prophets took centuries ago. I was looking at the walls, houses and shops around me that speak of centuries of history captured inside them.

Before entering the Masjid, we had to stop and show our passports to the Israeli security that verified if we were Muslims. Then the Palestinian caretakers of the Masjid also asked us to recite verses from Quran to authenticate our Muslim claim.

In order to follow the etiquettes of a holy worshipping place, we were asked to ensure we are fully covered from head to toe.

As I shared at the beginning of my story of how overwhelmed I was when I entered Al-Aqsa Masjid, I was simply awed. First I offered my prayers at the Dome of the rock. Then I offered Isha (last and fifth-night prayer) at the Al-Aqsa Masjid and thanked Allah for giving me this chance. Later on, my elder son joined me. The credit goes to him for making this trip possible and fulfilling his mother’s wish to pray in Al-Aqsa Masjid.

Masjid Al-Aqsa is significant in Islam because it is the first Kaa’ba (the direction towards which Muslims pray five times a day). Dome of the Rock – Qubbat As-Sakrah (Al-Haram Al-Sharif) is the holy place from where the Prophet Muhammad (PBUH) ascended to heavens, known as the Isra and Miraj (The Night Journey and Ascension). Both Masjid Al-Aqsa and Dome of the Rock are in the same compound, each on opposing sides of other.

The 27th of Rajab (seventh month of the Islamic calendar) marks the date for the miraculous Night journey and ascension to heavens by the Prophet Muhammad PBUH!

This miraculous journey is confirmed in the Quran in chapter 17, verse 1. “Glory be to Him Who took his servant by night from Masjid-ul-Haram to Masjid-ul-’Aqsa the precincts of which We have blessed that We show him (some) of Our signs. Verily, He is All-Hearing, All-Seeing.” (Quran, Chapter 17th, Verse 1)

Prophet Muhammad (PBUH) made his night journey from Mecca to Jerusalem, and then to the heavens in a single night on a white animal from paradise called “Buraq.” Although scholars debate whether this journey was physical or mystical, it makes Jerusalem the third holiest city for Muslims and confirms the continuity of Islam after Judaism and Christianity.

The significance of this trip is related to the five daily prayers Muslims offer. On this trip, the Prophet was commanded the prayers for the Muslims. Initially, 50 prayers a day were ordered, however, on return Prophet Moses, asked Prophet Muhammad to go back to Allah (God) and ask for a reduction. Allah reduced 10 prayers and then Prophet Moses again let the Prophet know from his experience with his followers this is still a lot.  So after multiple trips the prophet came back with the command of five daily prayers.  Prophet Moses still thought its a lot, however, Prophet Muhammad PBUH said he can’t go back again as he already felt ashamed.

Hence this is the brief story of the journey of Prophet Muhammad’s PBUH ascension to the heavens and thus this marks the importance of the Dome of the Rock – Qubbat As-Sakrah (Al-Haram Al-Sharif)” for the Muslims around the world.

In part two of my series, I will take my readers to my next stop “The Western Wall” also knows as “Wailing Wall” or “Kotel” and “Buraq” Wall in Islam.

Feel free to ask the author questions about her journey and share your spiritual experiences in the comment section below.

Maimoona Harrington was born and raised in Pakistan moved to the United States with her family in 2008. She is married and a mother of two sons. She has a bachelor’s degree in Islamic studies and sociology from Pakistan. Currently she is finishing her degree in Middle Eastern Studies at American Public University. Along with her current career as an interpreter she is also Islamic and Pakistani Culture Adviser.
As a practicing Muslim with the extensive world travel and living in the West, she has devoted herself to spread awareness of Islam as a goodwill gesture. In an effort to do this she started writing from her own personal experiences with religion, beliefs and life in a different culture. She also has special interest in all the religions and how and why they are all important to its followers. Her primary focus is on the co-existence and harmony between all human beings. Her message is to spread peace not division. She strongly believes that if you want to be closer to your creator then love His creation unconditionally and expect nothing in return for He loves us unconditionally and forgives us no matter how sinful we are!

Previous Wisdom for parents
Next Yom Kippur: A time for feasting as well as fasting