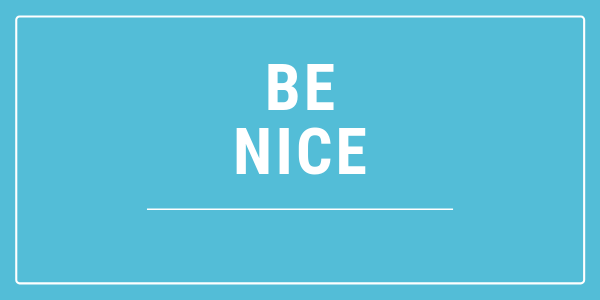 The photographed sign read, “You’re never too important to be nice to people.”

And then the Facebook comments started. Grammarians said the sign should have read “to NOT be nice …” But then someone said that if you take the phrase as a label it could mean, in effect, “I am too-important-to-be-nice.”

Even though all the exchanges were lighthearted and uncritical, I thought to myself, “You’re not being very nice to the person who made his/her best attempt to communicate a serious message.”

I thought about sharing that sentiment on Facebook. But that wouldn’t have been nice. Because as Richard Rohr once said, “You’re not that important.”

If I were to communicate anything in response, I would say thank you to the sign-writer for the well-meaning message.

Regardless of the debate over grammar, everyone would agree (I hope) that the message had made its point because everyone who saw the post thought about it and allowed the real message to sink in.

Tags be nice kindness and grammar

Previous In the Belly of Spokane’s Great Fish: How Interfaith Dialogue is Legitimate for Christians
Next The Future Depends on Raising Interfaith Allies